The arrest of Mossad’s Pakistani spy, whose name has not been released, is a blow to Israeli attempts to destabilise 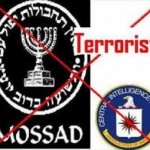 Pakistan. Coming hot on the heals of a Mossad spy being arrested in Lebanon who had been providing information to the Zionists for decades, a Pakistani recruited by Mossad has also been arrested in Lahore. While the arrest took place several weeks ago, details have just emerged.
The Pakistani was recruited during his incarceration in Guantanamo Bay where he was held for two and a half years. The fact that he was recruited by the Israeli spy agency Mossad reflects the deep links between the US and its Zionist ally. Guantanamo Bay (or Gitmo in regular parlance) is an illegal blackhole run by the US on a Cuban island illegally occupied by the US.

Subjected to torture during which he was offered a deal to work for Mossad in return for early release and huge rewards, the culprit agreed. Under interrogation, he revealed that from Gitmo he was sent to Spin Boldak in Afghanistan that is close to the Pakistani border. A purpose-built centre at Raazik Panchheeri serves as a base for training. This centre is used for training militants that are launched against Pakistan. Raazik Panchcheeri is the hometown of Qandahar spy chief who harbours special grudge against Pakistan even though such people frequently use Pakistan for their families’ treatment, visits and other activities. Think of biting the hand that feeds you!

Recruits are provided training in acts of terrorism such as making and planting bombs, identifying key individuals and secretly passing information to his handlers in Israel. He was unleashed on Pakistan after his training in Afghanistan. The fact that he operated for so many years without being detected is cause for concern. For nearly a decade, Pakistan has been engulfed in terrorist and suicide bombing campaigns that has killed thousands of people.

The Afghan terrorist training camp is under the direct supervision of the Indian Consulate in Qandahar. India has opened numerous consulates in almost all Afghan cities bordering Pakistan even though there are few Indians living there. It is widely known that these consulates serve as spying centres as well as training terrorists to be used against Pakistan. There is a close nexus between the Indians and the Israeli Mossad. Both are involved in training terrorists against Pakistan inside camps in Afghanistan. According to sources, there are at least 250 Pakistanis, most of them from Baluchistan that are receiving training in this camp.

The arrest of Mossad’s Pakistani spy, whose name has not been released, is a blow to Israeli attempts to destabilise Pakistan. Their Pakistani spy is 40 years old and holds a Masters degree in Information Technology. It is also revealing that he was arrested from the Defence Housing Society in Lahore, an upscale locality of Lahore, a few weeks ago. As the name suggests, Defence Housing Societies have a large number of retired military officers residing there. They have close contact with colleagues that are still in service. The presence of a Mossad spy living in such a locality clearly has much broader security implications.

According to Pakistani security personnel, the Mossad spy put up violent resistance to his arrest but was finally subdued. A large cache of weapons, maps of sensitive installations and a laptop were recovered from his possession. A search of his laptop revealed a treasure trove of information, just as vast amounts of information was retrieve from Raymond Davis’s cell phone after his capture in Lahore in January 2011. Davis was a CIA operative working undercover as US Consulate contractor in Lahore. Unfortunately he was allowed to go scot free under American pressure by the cowardly Pakistani rulers. Mossad’s spy will not be able to get away so easily, especially since he is a Pakistani citizen.

The Mossad spy was in touch with people in Israel on a regular basis via email. He had shared details of many sensitive installations with his handler who was in Jerusalem. His inbox was full of emails from IP addresses traced to Jerusalem.

Under interrogation, he admitted to his involvement in the attack on a Pakistan Army camp in Gujrat city on July 9, 2011. He also admitted to being involved in the killing of KPK jail police in Icchra, Lahore on July 12, 2011. When asked how many Pakistani security personnel he had killed, the Mossad spy confessed to killing more than 200.

As a highly qualified IT professional, the Mossad spy also admitted that he had recruited other Pakistani professionals with promises of huge amounts of cash and other rewards on behalf of Mossad. All members in his circle were well-educated people who willing sold their souls to the Zionists and Hindus for a fistful of dollars. As a result of his confession and information, most of them have been arrested. It came as no surprise when he admitted that a robust network of Mossad spies is operational throughout Pakistan. This network worked on many high-level terrorist plans in connivance with the Indian intelligence agency, RAW.

The Mossad-RAW nexus has been well known for decades. The Zionists are working in tandem with the Indians in Kashmir against the people there. Now Zionist tentacles have spread into most parts of Pakistan as well. The restive province of Baluchistan is their particular target because of its strategic location. The Mossad-RAW trained terrorists use the area around Pashin to move to and from Pakistan. Pashin lies in a strategic triangle bordering Pakistan, Afghanistan and Iran. In that area, Mossad-RAW agents can target both Iran and Pakistan. The American CIA is also active against both countries. (Source; Crescent-Online.net; January 29, 2013)