DISGRACED Pakistan paceman Mohammad Aamer says he hopes to return to the game before a five-year ban ends next year if the world cricket body amends its anti-corruption code.

Aamer’s spot-fixing ban ends in September 2015, but Pakistani cricket officials have applied for it to be relaxed, with the matter likely to be finalised in October. 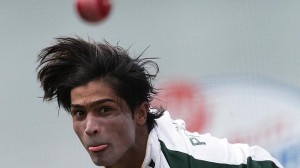 “It’s a frustratingly lengthy wait and I am counting every day with my fingers crossed,” the 22-year-old said on Sunday.

He was found guilty of spot-fixing during a Test at Lord’s in 2010 with two teammates, spent three months in a British jail and was banned in 2011 from the game by the International Cricket Council (ICC).

“I can’t say anything before October, whether I am able to return to international cricket or be able to play in domestic matches, it’s all up to the ICC,” Aamer said.

The Pakistan cricket board last year requested the ICC relax some of the conditions of Aamer’s ban to allow him to take part in domestic matches.

That prompted the ICC to form a committee to look into the matter as it agreed to review its anti-corruption code which carries a minimum five-year ban for offenders.

“I have never lost hope, that’s always with me,” Aamer said. “I train hard and will resume training in the next few days after the Ramadan break, so from my side I will be ready whenever the go-ahead comes.”

The left-armed paceman became the youngest player ever to take 50 Test wickets and guided Pakistan to a 1-1 series draw against Australia when the two teams played in England in June 2010.