Teams are focusing on a narrowed search area in the hunt for the missing Malaysia Airlines plane, after more signals were heard earlier this week. 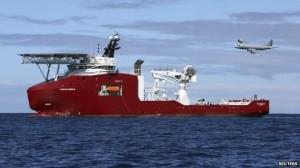 Thursday’s search was set to involve up to 14 aircraft and 13 ships, the agency co-ordinating the search announced.

On Wednesday, the official leading the search said he believed teams were looking “in the right area”.

“I’m now optimistic that we will find the aircraft, or what’s left of the aircraft, in the not too distant future,” said Air Chief Marshal Angus Houston.

Flight MH370 disappeared on 8 March, carrying 239 people. It was travelling from Kuala Lumpur to Beijing when it lost contact with air traffic controllers.

Malaysian officials say that based on satellite data, they believe it ended its flight in the southern Indian Ocean, thousands of kilometres from its intended flight path.

A multinational search is under way, based out of the Western Australian city of Perth, both for possible wreckage and for audio signals from the plane’s “black box” flight recorders.

So far an Australian vessel, the Ocean Shield, has picked up four acoustic signals in the same broad area, using a US Navy “towed pinger locator” to listen.

The signals were acquired twice over the weekend and again twice on Tuesday.

Expert analysis of the first two signals found that they were likely to be from specific electronic equipment consistent with a flight data recorder, ACM Houston said on Wednesday.

An Australian air force plane has been dropping buoys equipped with hydrophone listening devices into the water to help pick up more signals.

The batteries on the black box only last about a month, so teams need to work quickly to track the audio signals before they stop broadcasting.

“It looks like the signals we’ve picked up recently have been much weaker than the original signals we picked up,” ACM Houston said on Wednesday.

“So that means probably we’re either a long way away from it, or in my view more likely, the batteries are starting to fade. So we need to, as we say in Australia, make hay while the sun shines.”

Officials want as much data as possible from the acoustic signals before they send down a submersible drone, the Bluefin 21, to search for wreckage on the sea floor.

Thursday’s search area for floating debris lies west of the location where the signals were heard, some 2,280km (1,400 miles) north-west of Perth, the Joint Agency Co-ordination Centre (JACC) said.

“Aircraft and ships reported spotting a large number of objects during yesterday’s search, but only a small number were able to be recovered,” it said in a statement early on Thursday.

“None of the recovered items were believed to be associated with MH370.”

Investigators still do not know why MH370 strayed so far off course, after disappearing over the South China Sea between Malaysia and Vietnam.

The backgrounds of both passengers and crew have been scrutinised as officials considered hijacking, sabotage, pilot action or mechanical failure as possible causes.