A Coffee Table book titled “1975- 2014 Sri Lanka” was launched on Tuesday, 25th February 2014 at the Lakshman Kadirgamar Institute for International Relations and Strategic Studies (LKIIRSS) in Colombo, attended by diplomats, academics, media, government officials  and members of the armed forces. The book provides a collection of photographs depicting the turbulent phases of Sri Lanka’s history from the 70’s, when the LTTE first began its cycle of violence to the present time, and starkly showed the range of countless civilians, presidents, politicians, intellectuals, religious figures, civic society activists that were brutally murdered by the LTTE. 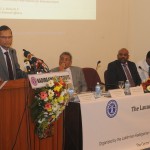 Speaking at the occasion, Prof. G.L. Peiris, Minister of External Affairs remarked that the book and the powerful images in the book  was a poignant reminder of the pain and anguish that the nation had to endure for three long decades and that it had defined Sri Lanka’s history for much of the past. In this regard, the Minister noted that many commentators had long thought that it would be impossible to achieve a victory against terrorism and that Sri Lanka’s achievement was unparalleled in any other country’s histories and he was pleased that that past was behind Sri Lanka and she was looking ahead with promise and renewal, after emerging from the shadows of a debilitating conflict.

Presenting an overview of the challenges confronting Sri Lanka’s present and its future, Prof. Peiris noted with grave concern that human rights was no longer based on moral or ethical issues, but on political ones. The Minister provided an overview of numerous instances, where it was being used selectively and that there was a need for uniformity in its application; with some countries left along and other countries, such as Sri Lanka  being singled out and hounded, disproportionately. The Minister drew parallels in Sri Lanka’s colonial past, where the British in seeking to bring the Kandyan Kingdom under their rule, also notions of protecting human rights to effectively subjugate and dominate the Sri Lankan people. Prof Peiris also contrasted notions of justice and retribution and highlighted that Sri Lanka drawing from a great continuum and heritage in the region, did not subscribe to a vindictive justice that was pushed by some. The Minister noted that despite the quests of a few to target Sri Lanka, other countries stood behind Sri Lanka to have its own national solutions to its specific challenges and circumstances and not impose external solutions.

The Minister urged the need for nations to be treated equally and fairly in the international arena and for human rights and other standards selectively applied to nations. Prof Peiris noted that the eradication of terrorism in Sri Lanka has paved for not only Sri Lanka’s development and progress, but that of the region. Prof. Peiris closed with summarising that Sri Lanka looked forward to engage its friends and the international community, with mutual respect and reciprocity and that after enduring the difficult legacy of the past, as a nation, could collectively face any challenge ahead.