Karachi (Tribune Correspondent); Prominent member of the Pakistani Community in Sydney, Minhas Zulfiqar, who was in hotel business and owned Crown Plaza Hotel in northern district, shot dead in Karachi. 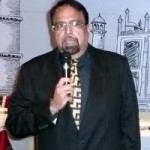 Late Mr. Zulfiqar was on his way in a car when unidentified motorcyclists opened fire on him near in Block 7, Clifton, Boat Basin. He was taken to Jinnah Hospital but unfortunately could not survive from the target killing. He was on holidays in Karachi with his wife and scheduled to return to Sydney just a day to go.

Pakistani Community in Sydney has been shocked on the killing of Minhas Zulfiqar. He was very social and used to take much interest in community affairs.