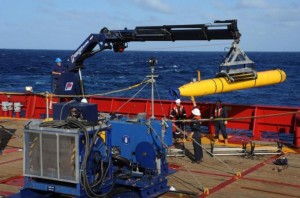 The search area for the missing Malaysian jet has proved too deep for a robotic submarine which was hauled back to the surface less than half way through its first seabed hunt for wreckage.

Search crews sent the Bluefin 21 deep into the Indian Ocean on Monday to begin scouring the seabed for the missing Malaysia Airlines Boeing 777 after failing for six days to detect any signals believed to be from its black boxes.

But after only six hours of its planned 16-hour mission on the sea bed, the vehicle exceeded its maximum depth limit of 4,500m and its built-in safety feature returned it to the surface, the search co-ordination centre said on Tuesday.

What if anything it might have discovered during the six-hour search was still being analysed, the centre said. The Bluefin 21 will resume the search Tuesday when weather conditions permit.

Search authorities knew that the primary wreckage from flight MH370 was likely lying at the limit of the Bluefin’s dive capabilities. Deeper diving submersibles have been evaluated, but none is yet available in the search area.

The search moved below the surface after crews picked up a series of underwater sounds over the past two weeks that were consistent with signals from an aircraft’s black boxes, which record flight data and cockpit conversations.

The devices emit “pings” so they can be more easily found, but their batteries only last about a month and are now believed dead.

Tony Abbott, the Australian prime minister, raised hopes last week when he said authorities were “very confident” the four strong underwater signals that were detected were from the black boxes on MH370, which disappeared on March 8 during a flight from Kuala Lumpur, Malaysia, to Beijing with 239 mostly Chinese nationals on board.