JOHANNESBURG: Mauritania moved a step closer to a first Africa Cup of Nations finals appearance Sunday with an historic 2-0 victory in Mauritius. 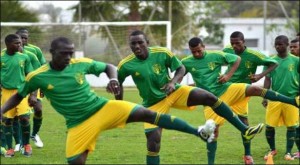 It was the first away qualifying victory by the Mauritanians in 21 attempts spanning 30 years after two draws and 18 defeats.

The football minnows from north-west Africa won the first leg 1-0 at home last weekend and qualified 3-0 on aggregate for the April 27 second-round draw.

Sow netted with a 35-metre shot seven minutes before half-time and Ahmed — the star of Mauritanian domestic football — slid the ball in from close range.

Success was particularly sweet for Mauritania after the pre-match setback of star Egypt-based striker Dominique da Silva being ruled out due to an administrative problem.

There were also reported concerns about the funding of the trip to the Indian Ocean island with the sports ministry rescuing the cash-strapped football federation.

The failure of Mauritius to score means striker Kersley Appou, who turns 44 Thursday, must hope for another chance to become the oldest national team goalscorer.

Aleksandar Duric holds the record, netting for Singapore against Malaysia in 2012 aged 42 years and 105 days. (AFP)