“Terhi hai,” she says of her love story. “Many glasses were broken. Like I said, nothing is normal in my life. We had a fight; I was debating on something, he was asking for clarification and … he proposed. It was a very wild proposal.” 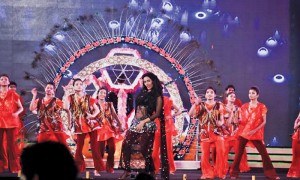 And that’s it. It wasn’t just glasses that were broken that day. Hearts too were broken. Of those who have Mathira’s photo set as a wallpaper on their mobile phones and desktops. And those who have her photos and dance numbers buried deep inside a maze of hidden folders. The 22-year-old — who has only become more famous with each controversy that has popped up along her journey as a yogi, TV host, singer and dancer — is now also someone’s wife. And what is even more surprising is that she has been married for almost a year now yet no one, except family members and a few close friends, knew about it! Until now, of course.

How is it that Mathira makes headlines even when she wishes someone on their birthday but no one was able to find out that she has been married for so long? “I am a very private person. Controversies break things. People shatter things. I keep family very safe and close. I’ve been broken, don’t want to break again. Just being careful,” she responds.

She’s been married for a year with only family and a few close friends knowing about it. When it comes to keeping secrets, few can beat Mathira at this game

But who is the lucky man?

“I am a person who keeps her family life secret. Relationships are very fragile so I avoid talking about them,” she says after refusing to reveal her husband’s name, “Sahi waqt par shakal bhi dikha doon gi.” She did however confirm that he is not associated with show business before disclosing that he does not even belong to Pakistan.

“I met him by accident. And then I kept meeting him. He always supports me. Nice boy. Chalak nahi hai. Samajhta hai asli Mathira ko,” she answers when asked how they met.

The couple isn’t likely to make a public appearance any time soon. “We will do it if we get the time,” she says. Responding to a question on how she plans to deal with all the media and public attention her marriage is going to get once the news breaks, she says, “Shadi kar li gunah nahi kiya. When we are ready we will come and face the camera. I will not allow anyone to comment on my personal life.”

In fact, she thinks it isn’t even a big deal. “I don’t think it is big news. Hazar log shadian kartay hain. I believe you get married for yourself. I got married for myself. For my little heart.”

Surely it can’t be easy being married to a star such as Mathira whose life is under constant scrutiny? Speaking about how her husband handles her critics, Mathira says sometimes he smiles but sometimes his ears get red, presumably with anger, “He is learning to handle things.” But this hardly seems to be a problem because she is adamant to keep her professional life separate from her married life. “When you mix the two you’re in for a mess,” she says.

Mathira says her husband does not have any problem with her career in show business and so her marriage won’t have any impact on her job. “I have been married for a while and that hasn’t affected my career.”

So has tying the knot changed her? “Marriage does not change people. You have to ignore the ‘being married’ bit and keep on being in a relationship.” She says relationships come as either blessings or lessons. Her relationship with her husband, she stresses, has been a blessing so far. “It can be a lesson but I hope it remains a blessing.”

Matrimony may not have changed Mathira yet, however she admits anything can happen in the future. “Things can change. I am ready. Marriage is a gamble. Sometimes you win loads of money sometimes you lose all of it. I am sitting on that table. Have chosen a number. It’s going round let’s see where it stops.”

She believes that there comes a time in life when one has to make mature decisions. “It is going steady and that’s one reason I have been absent from the media. Sometimes you have to settle that life and come back and settle this life. Swing around. That’s how life goes on.”

“I am coming back, darling!”

Talking about her future projects Mathira reveals that she is working on two Bollywood films. Both films have been 50 per cent completed, she says, and the shooting has taken place in India. She however refuses to give out any more details regarding the director, producer, cast or release date of the films. “I don’t want to talk about it because I want them to break the news; it’s much better like that.”

Discussing the negative feedback she received for her song Jhoota, she says criticism doesn’t bother her. “People wait hours to take photos with me. The same people later post those photos on Facebook with weird captions. That’s human nature.” Her advice: “You should be discouraged when no know notices you. That is when you should panic.”

And so her fans are in for a treat because she says she will be releasing another song soon. “There is going to be a boom. Again people will say ‘what the hell, ‘this and that’ but Mathira will be back by the end of September!”

Responding to a question whether Arbaz Khan (from Jhoota) will be a part of it, she says, “That was a bang this is going to be a boom. It is going to be 10 times bigger.”

It has almost been a year since Mathira tied the knot and while it’s not clear why she eventually chose to give out this information, it is certain this isn’t the only surprising news for her fans, “Abhi Mathira surprises day gi. Aik say aik say aik. I am coming back, darling!”

On her husband: “He’d fight for me. He is not at all rugged though. Just the beard. He keeps it because I like him with a beard.”

On marriage: “I am sitting on a gambling table in a casino named marriage. I hope to be the winner when I leave.”

Career is not everything: “There is a life beyond one’s career as well which you have to make. Or you at least have to try.”

Family reaction on her decision to get married: “My mom and sister have always been supportive. Dad was angry, still a bit angry; his choice was different.”

On Ayyan’s song You and I: “She is a nice doll-looking girl showing her smile and pretty eyes. Who am I to criticise? I know how it feels to be judged. I will never ever criticise any Pakistani woman working in the entertainment industry. She did a very good job!”

On criticism directed towards Humaima: “Maybe the audience is not willing to accept her in a role which is different than what she played in Bol. When a man stands shirtless he is called ‘hot’. If Fawad Khan or Imran Abbas do a romantic scene they are called ‘men’ and people say ‘wah wah kya kar kay aai ho chummi lay kay aai ho ya chummi day kay aai ho’?”

On actresses making bold choices: “An actress will only do what the director says, what the role requires.

Indian cinema won’t change its process for Pakistani girls wanting to work there. The woman who wanted to play Helen in Helen of Troy knew she’d have to do a scene where she’d have to walk nude because the book said so. She chose to do it. It’s about what the character demands.”

A Rose by any other name: Mathira’s sister to make film debut 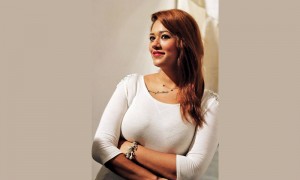 Mathira’s older sister Rose is among one of the characters in the film titled Azaad.

“It wasn’t planned. Things went that way so I said why not,” said Rose when asked why she decided to become a part of the entertainment industry. She said she chose to do this film because it was offered to her by a friend.

Rose, who has previously worked in an ad film and a TV drama, refused to talk about her character in Azaad, “Watch the film and see it, I don’t want to discuss it.”

Unlike her sister who set cinema screens on fire with her dance moves in Mein Hoon Shahid Afridi, Rose will not be seen doing any dance numbers in Azaad. And she isn’t bothered about comparisons drawn between her and Mathira. “It doesn’t matter. If your sister is successful that means you are successful too.”

When asked if she is looking to work on more projects she said, “Not really. If something comes my way I’ll go for it.” Apparently she isn’t keen to turn this opportunity into a career.

Although the film’s release date is not yet confirmed, Rose says it will hit theaters soon.