A woman who threw acid in the face of a friend while wearing a veil as a disguise has been jailed for 12 years. 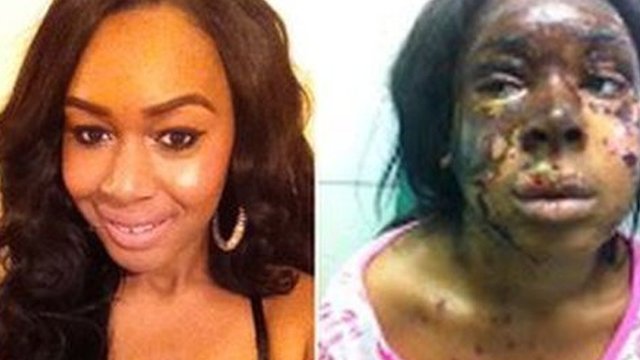 Naomi Oni, 22, suffered burns to her face and chest in the attack near her home in Dagenham, east London, in December 2012.

Mary Konye, 22, of Canning Town, allegedly attacked Ms Oni because she had called her ugly.

In a victim impact statement, Ms Oni said she had at times felt suicidal since the attack due to her appearance.

Judge David Radford told Konye the consequences of her “deliberate” and “wicked act” had been “devastating to Miss Oni”.

It was a “premeditated and callous” plan to “burn and disfigure” her victim, he added.

“This careful, premeditated criminality was planned against a person who reasonably believed you were a true friend,” the judge said.

“Her friendship had been so wilfully betrayed by you.”

Following the sentencing, lawyer Mitesh Patel read a statement on Ms Oni’s behalf, where she said: “My family and I have been forced to put up with false allegations about my character, including the false allegation that I had done this to myself”.

In the statement she said the effects of these allegations had been “devastating” and the “negative and false publicity” resulted in some people “distancing themselves from me during my hour of need”.

The false allegations referred to by Ms Oni were Konye’s claims in her defence case that the victim wanted to gain media publicity from the attack.

Ms Oni needed skin grafts and has suffered permanent scars to her leg, chest, stomach and arms and was almost blinded in one eye.

She must wear a silicon face mask and faces further reconstructive surgery.

In the impact statement, read to the court by prosecutor Gareth Patterson, Ms Oni said she found it very difficult to live with her physical appearance and was now “paranoid and scared” about being outdoors alone.

Ms Oni said that before the attack she was a “confident” young woman.

“All this changed that day I was struck with acid and my life was turned upside down,” she said. She added it was now a “battle to get by each day”.

Ms Oni said: “I’m reminded what I look like every day I look in the mirror or see the reaction on people’s faces.

“The whole traumatic experience has changed my life. At times I felt suicidal and thought about ending it all.”

It was her mother who had kept her going, she said.

“I feel paranoid and scared going out alone,” she said.

On being attacked by someone who had been a friend since secondary school, Ms Oni said: “It was bad enough believing it was a random attack. Knowing Mary planned this is beyond belief.

“I don’t trust people in the same way any more.”

Konye’s lawyer Sally O’Neill QC told the court she had admitted throwing the acid since her conviction but claims she did not intend to cause injury to Ms Oni’s face.

“The reason for this incident will always be shrouded in some doubt and mystery,” the lawyer said.