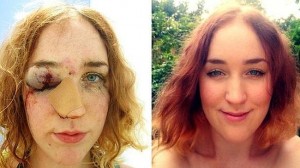 THIS woman spent nine hours in hospital after a man punched her in the face when she asked him to stop groping her. Now she is standing up.

Mary Brandon was attending the Notting Hill Carnival when a man grabbed her bottom. After Ms Brandon asked him to stop, he did it again.

“I pushed him away, exercising my right to tell a man to stop touching my body without my permission, so he took a swing at me and punched me in the face,” she wrote on Facebook.

She is encouraging other women to stand up and share their own stories of sexual abuse.

Hannah Dart, another woman who attending the Notting Hill Carnival, said she had encountered similar behaviour by men at the event.

“On my way home from carnival an amazing woman told me she’d had a broken bottle held up to her face when she’d yelled at a man for grabbing her friends boobs,” she wrote on Facebook. “I am so angry that these men take space and freedoms away from us to feed their own pathetic egos. Keep standing up for yourself, you did an amazing job.”

Ms Brandon said while her friends had advised her it might be “best not to do anything at all” she believes she would rather take another punch then let men feel that this is an appropriate way to treat women. A police investigation to catch Ms Barndon’s attacker is underway.

“I can honestly say I will always stand up to someone who thinks they can get away with this behaviour,” she said. “I’d take a punch again from this loser or any other loser who thinks it’s OK to treat women like this.”