Japan’s Yokohama Marinos club have been slapped with a $48,179 fine after a fan made a racist gesture during last Saturday’s match against Kawasaki Frontale at their Mitsuzawa Stadium, local media reported. 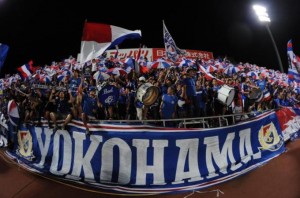 A Marinos supporter was seen on television waving a banana at Kawasaki’s Brazilian striker Renato during the 2-0 home win and the teenager was subsequently identified and banned indefinitely by the red-faced club.

In March, the J.League ordered Urawa Red Diamonds to play a home match behind closed doors after a banner daubed with the words ‘Japanese Only’ was displayed by one of the club’s fans in the fixture against Sagan Tosu.