At least 12 dead after bomb rips through Rawalpindi-bound train in restive Baluchistan province. 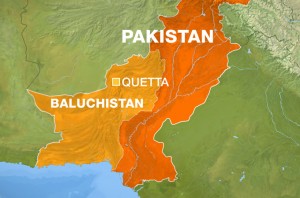 An explosion has ripped through a train in Pakistan’s restive southwestern province of Baluchistan, killing at least 12
people, officials say.

The bomb went off on the Rawalpindi-bound Jaffer Express in a carriage reserved for men in the town of Sibi about 160km south of the provincial capital of Quetta.

“We have recovered 11 dead bodies from the train. They have been burnt to charcoal,” senior police official Mohammad Nazar said, adding one injured person died after being taken to hospital.

The explosion left another 40 people injured.

Two carriages of the train caught fire after the blast but the flames had since been extinguished, Nazar said.

The injured have been taken to a military hospital in the same town, he said.

No one has claimed responsibility for the attack, but it came a day after paramilitary troops said they had launched an operation in the violence-racked province and killed around 40 armed men.

Resource-rich Baluchistan is home to a long-running separatist conflict that was revived in 2004, with nationalists seeking to stop what they see as the exploitation of the region’s natural resources and alleged rights abuses.