Michael Garcia, the chairman of the inquiry into the bidding processes for the 2018 and 2022 World Cup tournaments, called on FIFA to make his report public. 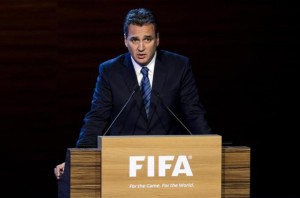 In a statement, issued by his office in Chicago, Garcia, who submitted his 350-page report to German judge Hans Joachim Eckert earlier this month, said FIFA should reconsider its position to keep it private.

While Garcia has led the investigation into alleged corruption surrounding the votes for the two tournaments, won by Russia and Qatar respectively, Eckert will decide what sanctions, if any, should be imposed.

“I believe it is now necessary for the FIFA Executive Committee to authorise the appropriate publication of the Report on the Inquiry into the 2018/2022 FIFA World Cup Bidding Process,” Garcia said in his statement.

Last week British Conservative MP Damian Collins said he had written to Britain’s Serious Fraud Office asking that it obtains a copy of the investigation which could lead to criminal charges.

Garcia’s statement on Wednesday comes the day before the start of a two-day FIFA executive committee meeting in Zurich.

In recent weeks FIFA executive committee members and vice-presidents Jim Boyce of Northern Ireland and Jeffrey Webb of the Cayman Islands, as well as Moya Doidd of Australia and Prince Ali Bin Al-Hussein of Jordan, have all called for Garcia’s full findings to be made public.