The quake was originally recorded at 8.0 before being revised down to 7.9.

“Overall, the population in this region resides in structures that are vulnerable to earthquake shaking…some casualties and damage are possible,” the USGS said on its website as it issued a yellow alert for shaking-related fatalities and losses.

The quake rattled residents near the epicenter on the island of New Ireland, but was not felt in Papua New Guinea’s capital, Port Moresby, said Mathew Moihoi, an official with the Geophysical Observatory. There were no immediate reports of damage, though officials were still assessing the situation, he said.

But Geoscience Australia seismologist Dan Jaksa downplayed the severity of the quake, noting its depth made the likelihood of a tsunami “low”.

“This region of PNG is also pretty remote and very, very sparsely populated,” he added.

Papua New Guinea sits on the Ring of Fire, the arc of seismic faults around the Pacific Ocean where earthquakes are common. 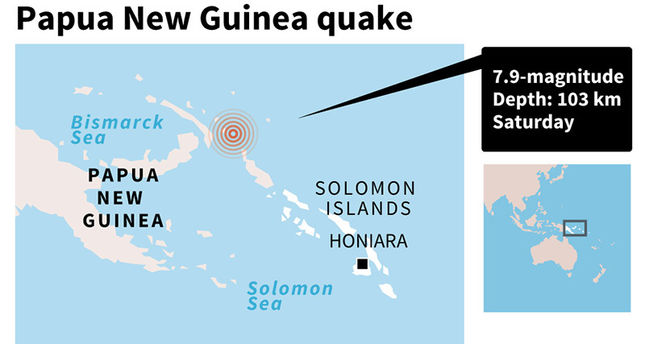