Former Real Madrid forward Alfredo Di Stefano, 88, one of the greatest footballers of all time, has died in the Spanish capital two days after suffering a heart attack. 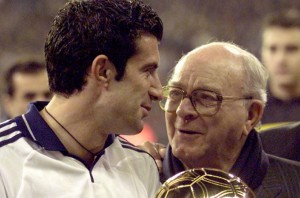 The club said in a statement that he passed away at the Gregorio Maranon hospital.

Argentina-born Di Stefano, who helped transform Real into one of the world’s leading teams in the 1950s and 60s, was taken to an intensive care unit.

He had suffered an 18-minute respiratory arrest, the emergency services said.

“A legendary player, a myth,” Spanish state secretary for sport Miguel Cardenal said in a statement expressing his sadness at Di Stefano’s passing, one of an avalanche of tributes that poured in after the news broke.

“There was nobody who stood comparison. He laid the foundations of a team that was named the best of the 20th century and that this year won the European Champions League.

“The legacy he left in Real Madrid’s DNA was of fighting to the end and never giving up. Don Alfredo was the greatest,” added Cardenal.

He helped the club win five successive European Cups between 1956-60 and scored in each of the finals.

Di Stefano had health problems in recent years and was fitted with a pacemaker in 2005 after heart surgery.