A MAJOR missing link in the state’s road network will be fixed by twin tunnels connecting the M1 and M2, and is expected to take up to 5000 trucks off Sydney roads.

In a show of unity between the state and federal governments, Prime Minister Tony Abbott and Premier Barry O’Farrell 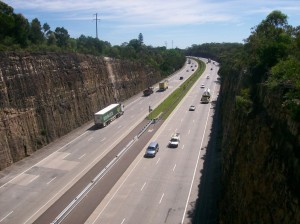 will today reveal the 9km route for the twin tunnels that are expected to become the state’s major freight route, and the highest tunnels in Sydney. Mr Abbott and Mr O’Farrell will each put $405 million into the project, which is expected to slash travel times by up to 15 minutes.

Construction will begin next year, creating hundreds of jobs.

The project will be a continuous link between the Hunter and Sydney and, when completed, will allow motorists to drive from Newcastle to Melbourne without encountering one traffic light. Mr O’Farrell said the twin tunnels would be a huge boost to residents of northwest Sydney.

“NorthConnex will significantly ease traffic congestion in Sydney by taking up to 5000 trucks a day off Pennant Hills Road, while vehicles using the tunnel will bypass 21 sets of traffic lights,” Mr O’Farrell said.

“The more efficient movement of freight will deliver major benefits to the Australian and NSW economies.

“By removing thousands of trucks a day from surface roads we will improve the lives of tens of thousands of people living near Pennant Hills Road.”

Mr Abbott said the NorthConnex is expected to open in 2019. As voters prepare to install a clean sweep of Coalition governments across Australia, the PM said the project was an example of the strong working relationship between the NSW and Commonwealth governments.

“Better infrastructure will be the hallmark of the Coalition Government and projects such as NorthConnex and WestConnex are part of a nationwide major roads blueprint,’’ Mr Abbott said.