KUALA LUMPUR/WASHINGTON: Faint electronic signals sent to satellites from a missing Malaysian jetliner show it may have been flown thousands of miles off course before running out of fuel over theIndian Ocean, a source familiar 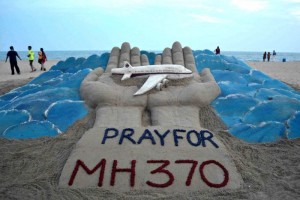 Investigators are focusing increasingly on foul play, as evidence suggests the plane turned sharply west after its disappearance and – with its communications systems deliberately switched off – continued to fly for perhaps several hours.

“What we can say is we are looking at sabotage, with hijack still on the cards,” said a senior Malaysian police official.

The Associated Press cited an unnamed Malaysian government official as saying investigators had “conclusively” established that one of the pilots or someone else with flying experience had hijacked the plane. That report could not immediately be confirmed with officials in Malaysia.

Malaysian Prime Minister Najib Razak was due to give a news conference at 1:30 p.m. (0530 GMT), his first such appearance since the day the flight disappeared.

Analysis in Malaysia and the United States of military radar tracking and pulses detected by satellites are starting to piece together an extraordinary picture of what may have happened to the plane after it lost contact with civilian air traffic control.

The fate of Malaysian Airlines Flight MH370, and the 239 passengers and crew aboard, has been shrouded in mystery since it vanished off Malaysia’s east coast less than an hour into a March 8 scheduled flight from Kuala Lumpur to Beijing.

A U.S. source familiar with the investigation said there was also discussion within the U.S. government that the plane’s disappearance might have involved an act of piracy.

A source familiar with data the U.S. government is receiving from the investigation said the pulses sent to satellites were ambiguous and had been interpreted to provide two different analyses.

The electronic signals were believed to have been transmitted for several hours after the plane flew out of radar range, said the source familiar with the data.

The most likely possibility is that, after travelling northwest, the Boeing 777-200ER made a sharp turn to the south, over the Indian Ocean where officials think, based on the available data, it flew until it ran out of fuel and crashed into the sea, added the source.

The other interpretation is that Flight MH370 continued to fly to the northwest and headed over Indian territory.

The source added that it was believed unlikely the plane flew for any length of time over India because that country has strong air defense and radar coverage and that should have allowed authorities there to see the plane and intercept it.

Either way, the analysis of satellite data appears to support the radar evidence outlined by sources familiar with the investigation in Malaysia.

That course – headed into the Andaman Sea and towards the Bay of Bengal in the Indian Ocean – could only have been set deliberately, either by flying the jet manually or by programming the auto-pilot.

“NOT A NORMAL INVESTIGATION”

The disappearance of the Boeing 777 – one of the safest commercial jets in service – is shaping into one of the most baffling mysteries in aviation history.

It is extremely rare for a modern passenger aircraft to disappear once it has reached cruising altitude, as MH370 had. When that does happen, the debris from a crash is usually found close to its last known position relatively quickly.

In this case, there has been no trace of the plane, nor any sign of wreckage, as the navies and military aircraft of more than a dozen countries scour the seas on both sides of peninsular Malaysia.

India has deployed ships, planes and helicopters from the remote, forested and mostly uninhabited Andaman and Nicobar Islands, at the juncture of the Bay of Bengal and the Andaman Sea. “This operation is like finding a needle in a haystack,” said Harmeet Singh, spokesman for the armed forces in the islands.

Britain’s Inmarsat said “routine, automated signals” from MH370 were seen on its satellite network during the plane’s flight from Kuala Lumpur and had been shared with authorities, but gave no other details.

If the jetliner did fly into the Indian Ocean, a vast expanse with depths of more than 7,000 meters (23,000 feet), the task faced by searchers would become dramatically more difficult. Winds and currents could shift any surface debris tens of nautical miles within hours.

“Ships alone are not going to get you that coverage, helicopters are barely going to make a dent in it and only a few countries fly P-3s (long-range search aircraft),” William Marks, spokesman for the U.S. Seventh Fleet, told Reuters.

The U.S. Navy was sending an advanced P-8A Poseidon plane to help search the Strait of Malacca, a busy sealane separating the Malay peninsula from the Indonesian island of Sumatra. It had already deployed a Navy P-3 Orion aircraft to those waters.

The last sighting of the aircraft on civilian radar screens came shortly before 1:30 a.m. last Saturday, less than an hour after take-off. It was flying across the mouth of the Gulf of Thailand on the eastern side of Malaysia towards Vietnam.

Malaysia’s air force chief said on Wednesday that an aircraft that could have been the missing plane was plotted on military radar at 2:15 a.m., 200 miles northwest of Penang Island off Malaysia’s west coast.

This position marks the limit of Malaysia’s military radar in that part of the country, another source familiar with the investigation told Reuters.