About 700,000 people in eastern Jharkhand state live amid fires triggered by mining of coal from the surface. 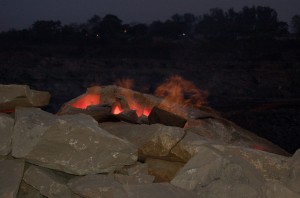 Mohammed Ashraf is 35 years old and still a bachelor. It is not that he is not ready to marry, but he is finding it hard to find a bride willing to tie the knot with him.

The problem is not with him, but the place where he resides. Much of Jharia in India’s eastern Jharkhand state is literally up in flames because of open-cast coal mining that involves excavations from the surface, and Ashraf has seen much of his marital dreams go up in smoke.

“People do come with proposals. But when they see we are literally sitting on fire, that our village is too dangerous to live, they run away,” Ashraf laments.

His Bokalpari village is adjacent to the town of Jharia, where about 700,000 people are virtually living on the lap of small fires that have been smoldering for years under the surface.

The area is rich in coal and to cut costs, much of the mining in the area is done by open-cast method. Open-cast mining is more profitable than deep mining as excavation cost is low and productivity is significantly higher.

In Jharia, coal is mined everywhere – in the villages and even next to dwellings. Even streets and railway tracks are not spared. Miners armed with shovels dig open pits and extract coal, before moving away. The residual coal left behind often catches fire – sometimes because of lightening or a carelessly thrown cigarette butt – and they continue to burn for years to come.

“It is as if the entire area is a burning oven,” points out Ashraf. Locals may not be far off the mark when they indulge in black humour and say that bread could be baked by simply placing the dough on the ground in Jharia, located in Dhanbad district about 270km from the provincial capital, Ranchi.

Bokalpari is one of the many fire-affected zones in Jharia, where no less than 67 fires – big and small – have been raging underneath.

Mining in the area is a source of revenue and livelihood. But for many villagers like Ashraf, it has been more of a curse.

Coal seam fires, as the blazes are technically known, spit out enormous amounts of carbon dioxide into the atmosphere – about 1.4bn tonnes of it annually in India, making it the fourth biggest producer of greenhouse gas in India.

Residents therefore are left to battle fire and smoke as coal extracted from the region helps to power India to become a regional super power.

Jharia’s tryst with mining started way back in 1896. The coal mines were nationalised in 1971, and a majority of the mines in the region are now owned by the state-owned Bharat Coking Coal Limited(BCCL).

Till 1973, underground mining was more of the norm. But a premium on profits has changed things since then, and opencast mining is the preferred method now.

“Coal seam fires became a threat only after BCCL took over the collieries and started doing open-cast mining in a bid to extract faster and cheaper coal, caring little for life of inhabitants,” alleges Ashok Agarwal of the Jharia Coalfield Bachao Samiti, an organisation formed to safeguard locals’ interests.

Agarwal lays the blame for the fires on BCCL squarely. Some mines owned privately face the same challenges while extracting coal, but they have efficiently controlled the spread of fire, he says.

Rules stipulate that the mined area should be filled with water and sand. BCCL insists it is playing by the rule book and doing everything within its means to control the fires.

“We are digging the fire out as part of the master plan. It has worked wonders for us as the fire area has reduced to 9 sq/km from12 sq/km in the past,” says T K Lahiri, managing director of BCCL.

Locals, however, contest the claim and say coal in pits left unfilled often come into contact with oxygen and catch fire. They, in fact, also add a rather sinister motive behind the raging fires.

“The BCCL is deliberately helping the spread of fire as it serves their purpose,” alleges Agarwal. According to him, the fires are being deliberately allowed to spread as newer areas would be declared too dangerous for living, leading to forced evictions of inhabitants. They, Agarwal says, would free up more areas for mining.

BCCL’s managing director, however, rubbishes the claim. “Some cunning people are spreading canards against us. If they have their way, the self-styled activists would not hesitate to blame us even for the mysterious disappearance of the Malaysian flight,” he retorts.

Amid the animated back and forth, Jharia burns. Dinanath Singh is a resident of Alkusha, a village whose population has dwindled from 2,000 to just 25 now. “Our houses are always very hot. Smoke and pungent gas continuously emanate from under the floor. BCCL is telling us to take a compensation of $164 and leave. They scared away most of our villagers, but we won’t buzz till we get a respectable compensation amount,” says Singh.

Many Jharia residents are putting up a stiff resistance, despite their failing health brought upon by continuous inhalation of toxic gases like carbon monoxide and sulphur dioxide.

NK Singh, a local doctor, says the situation in Jharia, one of India’s largest producers of coal, is alarming.

“Oxides, sulphur dioxide and suspended particles hanging in the air cause mainly skin and lungs diseases. Most inhabitants suffer from chronic bronchitis, asthma, skin diseases and phneumocoliosys (caused by coal dust). When gas gets trapped in land, it eventually contaminates water, resulting in sulfur poisoning that causes diseases like diarrohea and gastritis,” he points out.

There is little to dispute that the constant fires have blighted lives in Jharia. Even plans to relocate residents of fire-affected areas remain largely pipedreams. Only about 1,113 families out of a total of 52,000 have been moved to a township in Belgaria, and those who have moved in complain of lack of basic amenities and job opportunities.

The head of the Jharia Rehabilitation and Development Authorityblames the BCCL for the lack of progress. “The BCCL is blaming us for their failure. We need land to build houses for fire-affected people, but BCCL hasn’t been able to provide us adequate land as yet,” says Gopalji, who uses only one name.

Back home in her village, Anwari Khatun has enough idle time to ponder over the bleak future of her unmarried sons.  “Those who come run away at the very sight of flame and smoke emanating from our houses,” she says. To live in Jharia is to literally play with fire, and not many have the stomach for it.