LAHORE: A petition was filed in the Lahore High Court on Saturday seeking to disqualify Prime Minister Nawaz Sharif from the all-important NA-120 seat for lying in his yesterday’s speech to the Parliament.

The application was filed by Advocate Gauhar Nawaz who is a senior president of the Insaf Lawyers Forum.

The petition stated that the premier had lied to the nation on the issue of arbitration by the army and thus he did did not fulfill the qualifications specified in Articles 62 and 63 of the Constitution. 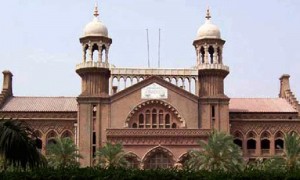 The application requested the disqualification of the premier from NA-120 and also said that a notice should be sent to him in this regard.

Nawaz had told the parliament on Friday that it was Pakistan Awami Tehreek (PAT) chief Dr Tahirul Qadri and Pakistan Tehreek-i-Insaf (PTI) chairman Imran Khan who had requested a meeting with Army Chief General Raheel Sharif in order to broker a settlement with the government over the prevailing political crisis.

Nawaz said he gave permission for the army chief to engage the two leaders and play the role of a mediator.

However, Imran and Qadri had categorically rejected the premier’s speech that they had invoked the army’s help and had, in separate speeches, slammed the premier for ‘lying to the nation’.

The military later issued a short statement saying that it was playing the role of facilitator in the ongoing political crisis at the behest of the government.