Australia will target Hashim Amla with verbal aggression and engage him in a “psychological war”, according to a dossier of team game-plans published in News Ltd newspapers in Australia. The papers claimed that the leaked document contained Australia’s “secret” plans to combat each of South Africa’s players, and including peppering Jacques Kallis with bouncers and going after the legspinner Imran Tahir. 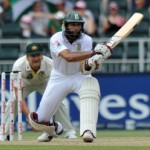 However, it is the plan to use verbal tactics against Amla in an effort to break his concentration that will create the biggest stir. The document also mentions Australia’s intent to send down plenty of short balls to Amla, who is the No.2 batsman in the world on the ICC Test rankings, and was one of South Africa’s strongest performers in the two-match series against Australia last year. He led the run tally with 239 at 59.75 and made two of only four centuries in the series.

Earlier on Wednesday, before the plans were published, Ricky Ponting was asked in Brisbane about whether sledging should be expected in the series, which begins at the Gabba on Friday. Ponting said Australia had no preconceived plans to sledge, but he conceded that in the heat of the battle for the No.1 Test ranking, things might get verbal at some point.

“Whenever South Africa and Australia play the rivalry and the way we go about our cricket is very similar,” Ponting said. “I expect it to be good, hard tough Test match cricket. Whether that means there’s words spoken or not, I don’t know. That’s stuff that happens in the heat of the battle. We’ve got no preconceived ideas about going out there and sledging or talking. We’ll hopefully do the talking with bat and ball.”

This will be the first series between the sides in which Australia will have the advantage of having as their mentor Mickey Arthur, the former South Africa coach who has worked with most of Graeme Smith’s squad in the past. Ponting said Arthur had been useful in devising plans against the South Africans, including how a powerful attack led by Dale Steyn would attack Australia’s batsman, and how best to rattle South Africa’s top order.

“We’ve done our homework on all of their players,” Ponting said. “We’ve got very specific plans with the way we’re going to bowl to a lot of their batsmen. As a batting group we’ve spoken long and hard about the way their bowlers will bowl to us as well. It’s nice to know that stuff and a bit of inside information from the coach on how their bowlers will probably try to bowl to us as well is good.

“We’ve got some areas for their batsmen that we’re going to target. Our young quicks are dying to get out there and have a crack at some of their top-order players. You can expect some fireworks. Some of their top order can expect a lot of short balls as well, that’s an area that we think we can really attack them. All in all our preparation so far has been good.”

The dossier printed in Thursday’s newspapers also suggests the Australians will aim to trap Graeme Smith on the crease and dismiss him lbw, and test Vernon Philander’s endurance and his ability to come back for third and fourth spells. As well as attacking what it calls an “impatient” Tahir, the file encourages batsmen to go hard at Morne Morkel.

The publication of the plans was reminiscent of an incident in 2000 when a dossier compiled by then-coach John Buchanan was leaked on a tour of New Zealand.