LADY Gaga has revealed in a new documentary that, at the height of her global fame, she was completely broke. 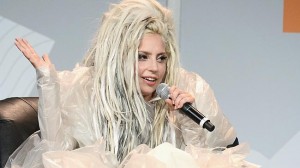 In the upcoming documentary Who the F**k is Arthur Fogel?, the singer admitted that she was bankrupt during her phenomenally successful 2009/10 Monster Ball tour, Us Weekly reported.

“I had $US3 million ($3.3 million) dollars in the bank to my name and I threw it all in to make my stage,” Gaga says in a snippet of the doco, which was shown via Entertainment Tonight in the US.

“So I was bankrupt during the show.

“I remember I went home and I was with my dad and he said, ‘I don’t understand. Bad Romance is out. You’re all over the radio. Everyone is talking about you and you don’t have a pot to piss in.’ I said, ‘Just let me do this. Let me just put it on the stage because I think if I can do this I can get Arthur Fogel’s attention.’ And I did.”

Ultimately, Fogel, the chairman of behemoth global touring company, Live Nation, came to the singer with a deal, which eased the financial pain just a tad.

“I remember he called me and he said, ‘We want to do this.’ And he got Live Nation to write me a $US40 million ($44 million) cheque. And it changed my life and the life of my whole family.”