LABOR veteran John Faulkner will quit politics, announcing today that he will not recontest the next election. 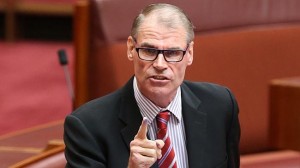 The former Defence Minister announced his intention not to renominate for the Senate, claiming to ask for another term would be an “indulgence” after 23 years in parliament.

But he had a parting message for his colleagues, saying nothing was more important than dealing with the corruption in the party and the need for reform.

He is believed to have told Labor leader Bill Shorten of his decision this morning.

Sources close to Mr Faulkner said he had taken the decision following the NSW Labor Party’s decision to fast-track Senate preselection to avoid Mr Shorten’s party reforms, which would make it harder for factions and unions to influence the process.

“In 1989 I was privileged to become a member of the Australian Parliament,” Mr Faulkner said in a statement on his website.

“Across the 25 years since then, this allowed me the unqualified honour of representing the Australian Labor Party, its members and its supporters, as a Senator for NSW, a minister or Cabinet minister in three Labor governments, as Senate Opposition Leader for eight years, and as a member of the Federal Parliamentary Labor Party — the Caucus — under 8 Federal leaders, four of whom served as Prime Minister.

“On Friday, the NSW Branch of the ALP will be calling nominations for preselection to the Senate term beginning July 1, 2017. I will not be putting my name forward.

“A quarter of a century is a long time, and my current term still has three years to run. To seek a further six-year term would be an indulgence.

“That said, I cannot stress enough my intense gratitude and thanks for the trust and support given me over these many years by my party and its loyal and often much put-upon members.

“Neville Wran nailed it when he once said that no one of us could ever claim to have given more to the Australian Labor Party than any of us had received from it. That is certainly true in my case.

“The only other point I make at this time concerns not my future, so much as Labor’s.

“Although I am today giving notice of my intention not to renominate for the Senate, I do intend to continue representing — in ALP forums, in the community at large, and while I remain in the Parliament — the interests of the Labor Party, its membership, and those supporters who still vote for us.

“My commitment to party reform and internal renewal remains undiminished. At the NSW ALP Annual Conference in July, I will be arguing just as forcefully for my proposed changes to the Party’s Rules to address internal corruption and to open up the closed factional processes of selecting Senate and NSW Legislative Council candidates.

“No issue is more critical for Labor in NSW.”

Mr Shorten paid tribute to the NSW Senator for his decades of dedicated service to the Labor Party.

“He has a proud legacy as a Cabinet Minister in the Keating, Rudd and Gillard Governments, and as a formidable and forensic Senator,” Mr Shorten said.

“John is a Labor Senator in the finest tradition. He has never cut the cloth of what he says to suit the fashion of the day.

“John is a keeper of the Labor flame. All of us in the Labor Party thank him for the service and guidance he has given our party, and our country.

“I’m pleased John will continue to hold the government to account in the Senate right up to the next election.

“In whatever John chooses to do in the next phase of his life, I know he’ll continue to make an important contribution to our cause.”