Kirkuk’s Turkmen vow to take up arms if the city is not returned to Iraqi central government.

Kirkuk, Iraq – Wearing a flak jacket with a pistol on his hip, the president of the Iraqi Turkmen Front (ITF), Arshad Salihi, announced yesterday the mobilisation of a new Turkmen militia in the city of Kirkuk, saying that if the Kurdish Peshmerga forces “refuse to return Kirkuk [to the Iraqi government] we will fight back”. 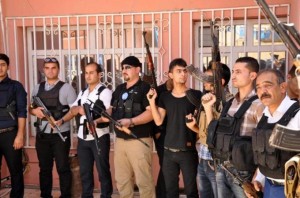 Heavily armed men gathered at the offices of the ITF in Kirkuk.  The announcement came after Kurdish forces seized control of the city on June 12 following the complete withdrawal of Iraqi army forces in the face of rapid advances by the Islamic State of Iraq and the Levant militants.

Yousif Mohammed Sadiq, the parliamentary speaker of the Kurdish Regional Government (KRG), said that the KRG has no plans to hand back control of Kirkuk, a city which has long been at the centre of disputes between the KRG and Baghdad.

Kirkuk has been extremely important to the Kurds both culturally and economically. It is a mixed city with Kurdish, Arab, Turkmen and As syrian populations and is frequently subject to attacks on the security forces and civilians carried out by militants aligned with al-Qaeda. Large oil reserves in the region of Kirkuk are a major factor in the dispute over control of the city.

Many observers argue that after gaining complete military control of Kirkuk without confrontation, it is highly improbable that the KRG will relinquish it.

A statement on the KRG’s website said that: “People living in areas under Peshmerga control … have nothing to fear because the Peshmerga will loyally protect them.”

The secretary-general of the Kurdish security forces, Jabber Yawar, reiterated this to Al Jazeera, saying of the ITF’s statement: “This is media propaganda. Today the Peshmerga are fighting to protect [the Turkmen village of] Mullah Bashir and fighting ISIL there. In Kirkuk, the Peshmerga are there to protect all the different ethnicities.”

However, Salihi expressed concern that “without the Iraqi army there will be radical political achievements for other sides”.

He went on to clarify that he was referring to the KRG framing his response in belligerent terms; “If they try to impose something that we do not accept, how can we live together? If today we don’t have forces, tomorrow we will have. We are asking people to carry weapons and defend themselves.”

The ITF’s announcement came a day after the predominantly Turkmen city of Tal Afar, west of Mosul, fell to insurgents from ISIL.

A Turkmen engineer from Kirkuk who asked to remain anonymous, said: “We don’t trust the Peshmerga because they only look after their own interests. They opened the gates of the army bases and allowed normal people to take what they want. Then they allowed those weapons to be sold on the street. This is evidence that they do not care about law and order in Kirkuk. How can we trust them? People are saying that yesterday they looted the army bases, tomorrow they may loot our shops.”