A day after Russia-Ukraine talks, Ukrainian army claims “up to 100” tanks and heavy weaponry crossed border from Russia.

A massive convoy of Russian tanks and heavy weapons have crossed into Ukraine, traveling towards a government-held town in the restive east, Ukraine’s army has said. 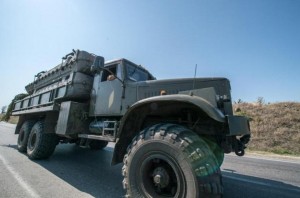 A statement published by the military on Wednesday said a convoy of “up to 100” tanks, armored vehicles and rocket launchers was seen traveling on a road toward Telmanove, a town about 80km south of rebel stronghold Donetsk and 20 km from the Russian border.

The army did not give details about the personnel on board the vehicles or when the column is thought to have entered Ukraine.

“We believe that this is Russian equipment. You cannot buy 100 tanks at a market in Donetsk or Lugansk,” a source told the AFP news agency. “Of course they have been moved from across the border.”

On Wednesday, AFP journalists travelling on the same road heading south to Telmanove said they saw traces of tank tracks and heard explosions.

The Ukrainian military also said that a smaller group of vehicles had crossed the border from Russia about 110km east of Donetsk and traveled on to the rebel stronghold.

Meanwhile, pro-Russia rebels launched at least 10 shells at the government-held town of Novoazovsk in southeastern Ukraine on Wednesday in response to outgoing fire earlier.

Plumes of black smoke rose above the town, which was also hit repeatedly by shelling on Tuesday, injuring four people in a hospital, mayor Oleg Sidorkin said.

The developments came a day after Vladimir Putin, the Russian president, and Petro Poroshenko, his Ukrainian counterpart, met in the Belarusian capital of Minsk for their first ever substantial one-on-one meeting.

Poroshenko called the talks “overall positive” and said Putin had accepted the principles of his peace plan, which includes an amnesty for those in the east not accused of serious crimes, and calls for some decentralisation of power to the region.

Putin, however, insisted that only Kiev could secure a ceasefire deal with the pro-Moscow separatists, saying the conflict was “Ukraine’s business”.

Russia “can only help to create an atmosphere of trust for this important and necessary process,” Putin said.

“We in Russia cannot talk about any conditions for the cease-fire, about any agreements between Kiev, Donetsk, Luhansk,” the two rebel regions.

Kiev and the West have repeatedly accused Russia of supplying arms and expertise to the rebels in eastern Ukraine, something Moscow denies.