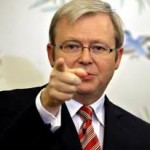 pledged to retire from politics at the upcoming election, by 57 votes to 45.

Mr Rudd becomes Labor leader and will now look to be sworn in as prime minister by the Governor-General.

“The mood was quite sombre,” he said.

“Most people are happy that the issue of the leadership is now put behind us so the party can now concentrate on preparing for the September election.”