KARACHI: The country’s financial capital was shut down due to a call for observing a ‘day of mourning’ by the Muttahida Qaumi Movement (MQM) against extrajudicial killings of its party members. 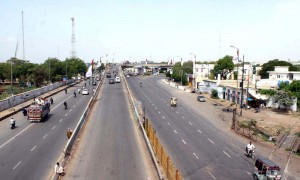 The party has called for a day of mourning in protest against the ‘extrajudicial killing’ of four MQM workers shot dead on Wednesday.

Associations of transporters and fuel filling stations announced that that they would open for business after 3 pm today.

On MQM’s appeal to observe a day of mourning, traders closed down their businesses, commercial centres and shops in Karachi.

Due to absence of public transport on roads, it became quite difficult for people to reach their destinations.

Transporters had also said they would support the party’s call by keeping their vehicles off the roads. Petrol and CNG stations as well as major and minor business centres were shut across the city.

The Private School Management Association on Thursday had announced that schools operating privately would remain shut.

Moreover, the Matriculation and Intermediate boards also postponed all examinations scheduled for today, the new dates for which would be announced later.

Funerals of two of the deceased workers were held yesterday where as funerals of the remaining two, whose bodies were found at Super Highway on Thursday, took place at Numaish chowrangi on Friday afternoon.

Raods from Numaish to Gurumandir were blocked for vehicular traffic along the route of the funeral processions.

Sindh Chief Minister Syed Qaim Ali Shah had also taken notice of the killings of the MQM workers and ordered the formation of a committee headed by DIG Karachi East Munir Ahmed Shaikh to probe the matter.

Usually a holiday is observed in Hyderabad on Friday and most big business and commercial centers remained closed with the exception of small bazaars, fruit markets and street shops but those too remained closed today on account of an observance of day of mourning announced by MQM against what it calls extra judicial killings and kidnappings following the recovery of bodies of four of its workers in Karachi.

The city had witnessed troubles on Thursday evening when shops and bazaars closed abruptly following news that MQM has announced a day of mourning.

Later, reports of aerial shooting were also received in isolated incidents but without any casualties.

Hyderabad is considered a stronghold of MQM after the provincial metropolis.

Life came to a halt on Friday as all main roads and arteries wore a deserted look in the city.

Banks and government offices were open but with thin attendance of staff.

Private transport like mini buses, vans and rickshaws remained completely off the roads.

Rangers personnel were patrolling several areas of the city and also removed barricades from the roads.

Inter-city vans, transporting passengers to different districts of the province either remained completely closed or did not get commuters.

Board of Intermediate and Secondary Education (BISE) had announced cancellation of first year paper scheduled for Friday in the wake of strike.

The new date would announced later, according to a BISE announcement.

In various areas including those of Market Tower, Phulelli, various units of Latifabad, Holmstead hall people raised barricades to block flow of traffic. Roads were littered with stones and bricks as well. Besides fruit vendors who did not appear on road, small cabins also remained closed.