Justice4Musharraf.com,online social media forum, has organized its 9th consecutive protest in Karachi on Sunday 9th March 2014.Civil society is strongly committed to its cause and will organize more protests in future against injustice 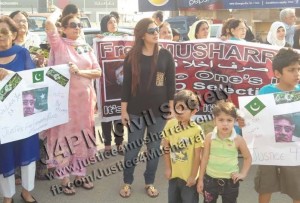 being done to former President Musharraf. We will support him whatever step he will take on 11th March hearing and hope Armed forces will ensure its dignity on 11th March, attendees of civil society protest said.

These protests have been organised and funded by a non political forum which entails of mostly students and women. The driving force behind these protests is the injustice being done against the former COAS & President of Pakistan Gen(R) Pervez Musharraf. He is the same person who stood for world peace in the “War on Terror” and supported the fight against terrorism and lead Pakistan from the front to become one of the first allies in this fight. Today the same person is being labelled a traitor by the oppressing and tested politicians through the victimizing courts. We seek the support from the world to highlight this judicial oppression. Specially, the Pakistani community in overseas should come out in Solidarity & Support a against the victimization of a Gen (Rtd.) Pervez Musharraf and the demoralization of Pakistan Army.