“Just after the horrible terrorists’ attack on army school in Peshawar, Imran Khan went to the scene, he declared war on 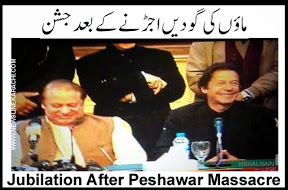 terrorists, Imran issued 24 hours ultimatum to the Prime Minister and the Army Chief of Pakistan in which demanded that the culprits behind this terrorist attack must be captured and hanged at D-Chowk Islamabad otherwise, 180 million people of Pakistan will march towards Islamabad on Dec 18, the day Imran already called a nation-wide strike against Sharif’s government on the charges of rigging in past election and corruption. Imran took the stand that there was no point discussing this horrible incident where over 140 innocent citizens killed including 130 children as this was the responsibility of the government to provide protection and safety to every citizen of Pakistan including these martyrs from these terrorists. Imran Khan announced that he was going straight to his ongoing sit-in container’s protest in Islamabad and will be waiting for people coming from all over Pakistan. News are breaking that many ministers including chief minister of Punjab Mian Shahbaz Sharif and Prime Minister Nawaz Sharif are planning to escape from Pakistan. On the other hand United States, UK and India condemned Imran Khan’s stance and reaction on Peshawar’s incident and announced that they will protect the government of Nawaz Sharif, these 3 countries also announced that they will do everything to rescue Nawaz Sharif and Asif Zardari from Pakistan if required as these leaders always protected the interest of their countries as and when needed. Stories are also coming from every city and town of Pakistan that people are already leaving their homes and marching towards Islamabad. According to the foreign media some top religious leaders and supporters of Taliban including Molvi Abdul Aziz are trying to escape from Pakistan to Afghanistan, the Pakistani forces are after them to capture them before they cross Pak-Afghan border”.

Unfortunately, nothing happened like above – WHY? Because a leader needs fearless commitment with his journey for his followers which no one has in Pakistan!!! Instead Imran Khan who had been calling Nawaz Sharif a liar and corrupt until yesterday, met with Mr. Sharif and offered his full support to Sharif’s government, and Imran has called off his over 100 days long sit-in protest in Islamabad.”

When the people of a state are Hippocrates their leaders are the models of hypocrisy.

Pakistani nation bowed down against Nawaz Sharif government and preferred to choose silence and candle light events in respond to the terrorists’ catastrophic massacre of over 130 children.

Kashmir dispute for Indians & the World

Australian Cricketers, you are pride for us