LAHORE: Punjab chief minister Shahbaz Sharif narrowly escaped a shoe hurled at him during the inauguration of a three-day South Asia Labour Conference in Lahore. 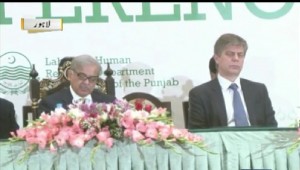 The shoe-hurler turned out to be a journalist who aimed the shoe at Shahbaz but missed his target. The shoe landed near the stage instead where the CM was sitting.

He was taken into custody by the police after Shahbaz made his departure from the hotel where the conference was taking place.

However, the Punjab CM ordered authorities to release his attacker.

The journalist, who threw the shoe, also held a banner that demanded the arrest of those involved in the attack on senior journalist Hamid Mir. Speaking to media later, he said he had vented out his anger by throwing the shoe.