Mitchell Johnson is not prepared to buy into England’s mind games, but Australia’s strike weapon is full of confidence and champing at the bit to tear in during Saturday’s World Cup opener at the MCG. England captain Eoin Morgan bizarrely tried to talk down the impact of Johnson after the Carlton Mid ODI Tri-Series final at the WACA, claiming it “could have been anybody bowling” after the left-armer ripped through England’s top order with three quick wickets.

“Absolutely not, I don’t think he swung it,” Morgan said of Johnson’s opening spell in Perth on February 1.

“I don’t know why we performed like this … Our biggest worry was the pitch … But I don’t think we threatened that much today. We were poor,” Morgan added.

While England sharpened up against the West Indies in Sydney today, a relaxed Johnson said he couldn’t wait to get started in Melbourne.

“I’m not going to get into what he said … I’m a fast, aggressive bowler,” Johnson said.

“I think I’ve proved throughout my career that I like to bowl short. Sometimes I swing the ball, sometimes I don’t.

“But my consistency has improved over the last few years and that’s what has helped me.

“I’ve just got to keep playing my game and not get involved in mind games.”

Johnson returned for that tri-series final having missed a month of cricket after picking up an injury in the Boxing Day Test. His wicket-taking return has him feeling at his peak for the Cup.

“For me, personally, to have a month off not playing cricket and then to come out and perform was a really good sign for me,” said Johnson. 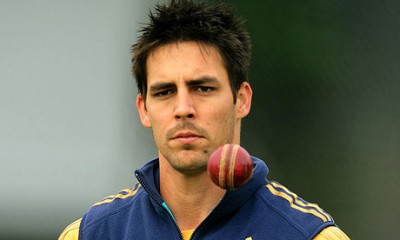 “I feel like I’m better the more I bowl. I’m in a good situation now where I’ve freshened up, I know where I’m at with my game, it’s exciting.”

A crowd of up to 90,000 is expected at the MCG for Australia’s World Cup opener.

“It’s nice to stand in front of a big crowd like that, it’s only been a handful of occasions for me to play in front of such big crowds,” said Johnson.

“But I think it will be a different intensity to the crowd.

“It’s something I will take in when I get out there with the ball in my hand but then just really focus on what I need to do – and that’s bowl well for Australia.”