A Japanese astronaut created microgravity, multicolored light show on the International Space Station in the name of art.

Japan Aerospace Exploration Agency (JAXA) astronaut Kiochi Wakata has been using a specialized device that can to create swirly light art in weightlessness on the orbiting outpost. Known as a “spiral top,” the instrument is outfitted with LED lights so that when spun, the top will create light trails that can be captured in photos. 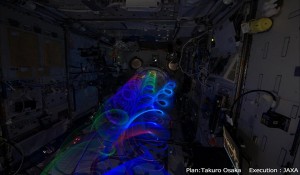 “In microgravity, the center of gravity of the spinning top continuously and randomly moves while it is spinning,” JAXA officials said in an experiment description. “Using the characteristics of the top in microgravity, the project tries to produce various light arts using its unexpected movements/spins, by changing attaching locations of its arms and weights.”

The end result of those spins in microgravity is an amazing light portrait that looks otherworldly. Wakata posted a few photos on Twitter earlier in January 2014 that show blue, green, yellow and red spirals shooting through a module on the space station. “Potential of what zero-gravity can create is unlimited!” Wakata (@Astro_Wakata) wrote on Twitter in a post from Jan. 6.

“When we ask astronauts to carry out an art experiment, they work on it with great excitement and enthusiasm,” Keiji Tachikawa, president of JAXA, said in a 2011 Q&A. “I believe that experiments for thehumanities and social sciences have a great deal of meaning. How we can culturally reflect the wonderfulresults that have been achieved thus far — this will be a moment of truth.”

This isn’t the first time JAXA has worked with a spiral top, originally created by Takuro Osaka. Astronauts used an earlier version of the experiment to create light art in 2009 on the space station as well.

Wakata is currently one of six international crewmembers living and working on the International Space Station. NASA astronauts Mike Hopkins and Rick Mastracchio, cosmonauts Mikhail Tyurin, Sergey Ryazanskiy and Oleg Kotov join him to round out the space laboratory’s Expedition 38 crew. Mastracchio, Tyurin and Wakata are scheduled to fly back to Earth aboard their Russian Soyuz spacecraft in May.

The $100 billion space station is the largest structure ever built in space. It has the wingspan of a f

ootball field and the living space of a five-bedroom house. Crews of astronauts and cosmonauts have continuously staffed the orbiting outpost since 2000.