CALI, Colombia – Italy’s first black minister defended her adopted homeland insisting it is not racist even though she 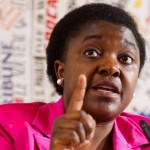 endured a series of racially-charged threats and taunts since assuming her post.

Speaking to a gathering in Colombia of leaders of African descent,  Integration Minister Cecile Kyenge defended her Italian compatriots, saying the  racial insults do not reflect an entire nation.

“Italy is not racist, it is not xenophobic,” said Kyenge, who was born in  the Democratic Republic of Congo.

“There are episodes of racism, but this doesn’t allow you to label an  entire country.”    Kyenge, the first person of African ancestry to serve in Italy’s cabinet,  has been greeted in her official duties with strong anti-immigrant and even  racist pushback, including epithets and slurs.

An eye doctor who is now an Italian citizen, she was likened to an  orangutan by a senior party member of the far right Northern League and had  bananas thrown at her at a recent political rally.

Far-right militants even hung nooses in a town where she was due to speak  earlier this month.

The minister said that acts of racism directed at her and other immigrants  stem from “a lack of memory” in young Italians, who have forgotten that Italy  is a “nation of immigration and of emigration.”    “For some people it has been difficult to accept a person of another color,  another race,” Kyenge said. “I believe it is possible to change that culture.”

Kyenge acknowledged, however, that being the object of constant threats has  come at a personal cost.

“A lot of things have changed,” she said somewhat ruefully. “Before, I was  free to do a lot of things. Now I have to walk around the country with  bodyguards, and I’m not free.”

She added  that it was worth the sacrifice if immigrants coming to Italy  ultimately are able “to live and work in the country of their choice.”

The African diaspora meeting is being held in the western Colombian city of  Cali and the northwest city of Cartagena — both of which have large black  populations. – AFP