Italy and the Netherlands secured qualification for the 2014 World Cup on Tuesday with two matches to spare. 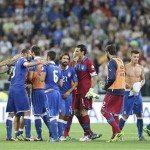 Italy came from behind to beat the visiting Czech Republic, 2-1, when Giorgio Chiellini headed in an equalizer and Mario Balotelli scored the winner from the penalty spot.  Czech Republic Coach Michal Bilek resigned after the game.

Robin van Persie broke down a stubborn Andorra defense with two second-half goals in a 2-0 away win for the Netherlands. The Netherlands is No. 5 in the FIFA rankings, and Andorra is No. 205

In other matches, visiting Germany moved a step closer to World Cup qualification with a 3-0 win over 10-man Faeroe Islands. Switzerland took a big step toward reaching the World Cup, winning by 2-0 at its closest challenger, Norway.

England secured a 0-0 draw against host Ukraine to take a 1-point lead in its group.