GAZA CITY: The Israeli army on Saturday gave a first indication it was ending operations in parts of Gaza, while continuing to bombard other areas ahead of fresh truce talks in Cairo.

As a Palestinian delegation flew to Egypt in search of a ceasefire, the Israeli army conveyed a message to residents of part of northern Gaza that it was “safe” to return home. 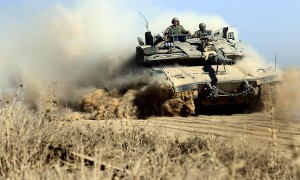 “They have been informed it is safe for civilians to return to Beit Lahiya and Al-Atatra,” a spokeswoman told AFP, in what was understood to be a confirmation that troops had stopped operating there.

Witnesses in the north confirmed seeing troops leaving the area as others seen leaving another flashpoint area in southern Gaza.

It was the first time troops had been seen pulling back since the start of Israel’s devastating 26-day operation, which has so far claimed more than 1,660 Palestinian lives and forced up to a quarter of the territory’s population into exile.

The move came after an army spokesman told AFP Israel was “quite close to completing” the destruction of tunnels used for infiltrating southern Israel, the main objective of the ground operation.

Despite the partial withdrawal, Israel’s security cabinet decided against sending a delegation to ceasefire talks with the Palestinian delegation in Cairo.

A senior political official quoted by army radio said Hamas was “not interested in an arrangement”, with some commentators suggesting the pullback could signal the start of a unilateral Israeli withdrawal.

But the chances of the sides halting fire seemed remote after Israel said it believed militants had captured a 23-year-old soldier in a Friday morning ambush near the southern Gaza city of Rafah.

Immediately afterwards, Israel bombarded the Rafah area in shelling that is still ongoing, with medics saying it killed 114 people in 24 hours.

Since midnight (2100 GMT), more than 74 people have been killed, the vast majority in Rafah, raising the overall toll to 1,670, emergency services spokesman Ashraf al-Qudra said.

The vast majority of the dead are civilians, medics said, with the number of wounded at more than 9,000.

The alleged capture of Second Lieutenant Hadar Goldin drew sharp condemnation from the United Nations and the White House, who had jointly brokered the abortive 72-hour truce, and who demanded his immediate release.

Israel has said it believes Goldin was snatched in an ambush that involved a suicide bomber, who killed two other soldiers, and has placed the blame squarely on Hamas.

Hamas’s armed wing, the Ezzedine al-Qassam Brigades, acknowledged its militants had staged an ambush early Friday in which soldiers were killed, but denied holding the missing man, saying the attackers were missing and presumed dead.

“We have lost contact with the mujahedeen unit that was in that ambush, and we think that all the fighters in this unit were killed by Zionist shelling along with the soldier, who the enemy says is missing, assuming our combatants captured this soldier during the fighting,” it said,

“Until now, we in Qassam have no knowledge of the missing soldier, or his whereabouts or the circumstances of his disappearance. “

Israel said it was focusing its search for Goldin on the outskirts of sprawling Rafah, where some 210,00 Palestinians live.

Israel considers the capture of its soldiers a casus belli.

In 2006, Gaza militants captured conscript Gilad Shalit and held him for five years before freeing him in exchange for more than 1,000 Palestinian prisoners.

Weeks after Shalit’s capture, Israel launched a 34-day war on the Hezbollah militia in Lebanon after it seized two soldiers, whose remains were later returned in another swap deal.

US President Barack Obama “unequivocally condemned” Friday’s killing of two soldiers and the lieutenant’s alleged capture, saying that if those responsible wanted an end to the bloodshed, Goldin would need to be “unconditionally released, as soon as possible”.

Meanwhile, air strikes and tank fire pounding huge areas of Gaza into rubble, killing four members of the same family in the central area of Deir al-Balah and another eight, from two separate families, in Rafah, medics said. Israeli’s army also said it intercepted two rockets from Gaza on Saturday.

UN figures show that up to 25 per cent of Gaza’s population of 1.8 million may have been forcibly displaced, with more than a quarter of a million now seeking safety in shelters belonging to UNRWA, the UN agency for Palestinian refugees.

Ahead of the meeting, Sisi said Egypt’s Gaza truce proposal offered a “real chance to find a solution to the crisis” but that it must be implemented quickly to stop the bloodshed.