More than 1,000 Palestinian citizens of Israel have been arrested since Israel’s Gaza offensive began in early July.

More than 1,000 Palestinian citizens of Israel have been arrested by the Israeli police since the country’s military offensive in Gaza began in early July, according to a lawyer representing a number of the detainees. 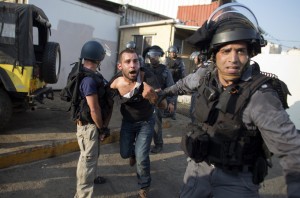 While some have been arrested for protesting the Israeli incursion into Gaza, dozens are currently being held without charge. Many say they have been detained based on policemen’s “lies”, while some have been beaten to the point of needing medical care.

Maisa Arshid, an attorney for dozens of the detainees, said that the crackdown on Palestinian citizens is only getting worse, with 20 to 30 Palestinians getting picked up every week in the Nazareth area alone.

“All of them are accused of participating in illegal demonstrations,” Arshid told Reporters, adding that “part of these demos were permitted by the police themselves”.

In many cases, the Israeli authorities have presented no evidence that the accused have participated in a protest other than a police officer’s word. Arshid also said that the police frequently hold people for short periods without registering their detention, likely putting the number of those who have been picked up by the police even higher than 1,000.

When the wave of arrests began earlier in July, Palestinian citizens were detained and quickly released while others were placed under house arrest, or ordered to do community service. But as Israel’s assault on Gaza has gone on, Palestinian citizens have been subject to much longer detainments.

This week, Arshid visited a group of detainees who had been held without charge for nine days. “Each day the court is delaying their hearing,” she said, adding that hearings initially scheduled for Sunday, were pushed back to Tuesday.

This way of prolonging their detentions has a chilling effect on demonstrations against the war in Gaza and “terrorize the population” into silence, Arshid argued. “If people in the street know that people have been arrested for nine days, it will prevent protest.”

Israeli police provide a security presence when Jewish-Israeli leftists protest against the war. But these activists are facing increasingly violent attacks from their countrymen.

Moriel Rothman-Zecher attended Tel Aviv’s most recent demonstration against the ongoing Israeli operation in Gaza, which drew approximately 5,000 protesters. There were only a few hundred right-wing counter-demonstrators, Rothman-Zecher told reporter, “but they were really, really energetic”.

Israeli police stood between the two groups, preventing any potential clashes, but when the protest ended, right-wingers confronted the anti-war protesters on the street. They shouted at the demonstrators, calling them “smelly traitors”. A counter-protester who was carrying an Israeli flag began to beat someone with the flagstick, while another started hitting an anti-war protester on the head with a crutch.

Rothman-Zecher said that the right wing “desire for violence” is not new. “But there’s a new level of acceptability,” he said.

He used the Jerusalem Day protests – when right wing Israelis march to mark the “reunification” of the city – as an example. In the past, it “was nationalistic and aggressive” but leftists would be shocked to hear right wingers openly chant “Death to the Arabs”, Rothman-Zecher said. “It was under the surface but it was still surprising. Now it’s become the baseline.”

Although no one is organising the counter-demonstrations – and Rothman-Zecher pointed out that they tend to come from poor, marginalised communities – he argued that Israeli leaders are responsible for right wing violence.

“When the leaders of the country call openly for revenge and violence, of course it becomes kosher,” he said. He added: “You have members of Knesset calling for population transfer, [a former] member of Knesset [boasting] that [he] killed Arabs… I believe very strongly that discourse shapes reality.”

Palestinian citizens have recently also been arrested for “incitement” for calling for demonstrations against the ongoing Israeli offensive. Adalah, the Legal Center for Arab Minority Rights in Israel, points out that these citizens “were arrested even before any demonstrations began”.

Among them was Rafaat Awaishi, who Israeli police placed under house arrest without a hearing, after he posted a call on Facebook for people to join protests against Israel’s assault on Gaza.

The conditions detainees face also seem intended to deter protests. According to Arshid, several of her clients have been beaten while in custody and needed medical treatment for their injuries. During an interrogation, police allegedly removed a detainee’s kuffiyeh [traditional Palestinian scarf], urinated on it, and then put it back on the man’s neck, Arshid said.

The arrests and detentions seem to be part of a broader crackdown on dissent and freedom of expression. On Wednesday, the Israeli Knesset heard a bill that proposes to outlaw “discrimination against soldiers in uniform” the Jerusalem Post reported.

Pnina Tamnu-Shata, the Knesset Member who presented the bill, pointed to protests against Israel’s Operation Protective Edge as proof that Israel “must set limits for words of incitement against soldiers. Not everything is allowed in the name of democracy”.

Palestinian citizens who attend Israeli universities have already been subject to disciplinary hearings and expulsion due to remarks made on Facebook against Israeli soldiers. In a letter to the Council of Higher Education in Israel, the Association of Civil Rights in Israel (ACRI) likened the universities’ monitoring of Palestinian students’ social media accounts to a “witch hunt”.

In a press release, ACRI stated that “only Arab students have been punished, even though the social forums are simmering with racist comments by Jewish students, which raises a concern that the heads of the institutions are acting according to patriotic and emotional motives that do not align with their professional obligations”.

Saher Jeries is a 22-year-old marketing and advertising student who lives in Haifa. He said he was at a protest there, standing in the back, when police officers began to beat him. He and other protesters were put on a bus where they were held for six hours before they were driven to the police station for interrogation.

During questioning, Jeries found that the Israeli police were not only trying to control the discourse about Gaza, but also seemed intent on reshaping his identity. “They said to me, ‘You’re Christian, why are you doing things like this?’ As though I’m not part of the [Palestinian] people,” Jeries said.