The newly elected leader of the Islamic State has made his first public appearance since proclaiming a caliphate, justifying the Sunni-led rebellion against the Iraqi government. 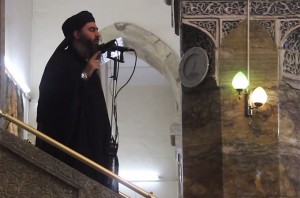 In a video posted on social media, the newly elected ‘caliph’, Abu Bakr al-Baghdadi, is seen delivering a Friday sermon and leading prayers in the grand mosque of Mosul.

Baghdadi, who delivers a 15-minute-long sermon wearing a black turban and robe, spoke on the blessings of the Muslim fasting month of Ramadan, and the legitimacy of fighting in the path of God against oppression.

Quoting verses from the Quran on jihad, Baghdadi spoke on the need of establishing sharia rule and how God had helped the “jihadists” in establishing the so-called caliphate.

“The establishment of a caliphate is an obligation,” he said. “The religion cannot be in place unless the sharia is established.”

The Islamic State, which has swept across much of northern and western Iraq, has tapped into the grievances among the country’s Sunni community with Nouri al-Maliki, Iraq’s prime minister, and his Shia-led government.

Baghdadi’s purported descent from Prophet Muhammad’s grandson was also mentioned in the video to comply with the requirement that a caliph be a member of the Prophet’s Quraish tribe.

He also called on the people to obey him as long as he followed the “commands of God” and said he would not treat his subjects as other kings and rulers do.

“If you see that I am wrong, advise me and put me on the right track, and obey me as long as I obey God in you,” he said.

Al Jazeera’s Imran Khan, reporting from Baghdad, said it was a bold statement by Baghdadi, suggesting to the Iraqi government he was free to travel wherever he wanted in the territory of the self-declared caliphate.

He said in a statement on Saturday that the declaration was “void under sharia”.

“The declaration issued by the Islamic State is void under sharia and has dangerous consequences for the Sunnis in Iraq and for the revolt in Syria,” he said.

“We look forward to the coming caliphate.”

Since proclaiming a caliphate, numerous figures from the Sunni community have dismissed the Islamic State’s assertions.

Since proclaiming the caliphate, the Islamic State has promised to sweep away with state borders and redraw the map of the Middle East.

The group already dominates territory stretching from Aleppo in Syria to towns close to Baghdad.

Maliki, who has held the post since 2006, has rejected a chorus of calls for him to step aside, with even some of his former allies blaming his failure to promote reconciliation for fuelling the discontent.

Iyad Allawi, the former Iraqi prime minister, on Saturday urged Maliki to give up his bid for a third term in power or risk the dismemberment of the country.

“If he stays on, I think there will be significant problems in the country and a lot of troubles. I believe that Iraq would go the route of dismemberment,” he said.

Meanwhile, Maliki has removed the chief of the army’s ground forces and the head of the federal police from their posts, according to Iraq’s military spokesman.

Last month, Maliki retired three generals who had been deployed in the north and ordered legal proceedings against them.

In another conflict-related development, an Iranian pilot was killed while fighting in Iraq, in what is thought to be the first military casualty that Iran, Middle East’s biggest Shia power, officially has acknowledged.

Since the start of the conflict, Iran’s President Hassan Rouhani has promised to provide Iraq with whatever it needs to counter the Sunni-led rebels.

Al Jazeera’s Khan said there were no reports of a plane being shot down in Iraq, so the pilot probably died while fighting on the ground.

Reports of the Iranian pilot’s death came as the Sunni-led rebels claimed to have demolished Shia shrines and mosques in northern Iraq.