Residents of Amerli say they are running out of water and food supplies, as the UN warns of a ‘desperate’ situation.

Kirkuk, Iraq – About to give birth, and with all roads in and out of town blocked, Amina lived in fear for eight days as fighters from the Islamic State group besieged the Iraqi town of Amerli.

Home to about 15,000 primarily Shia Muslim Turkmen, an ethnic minority in Iraq, Amerli sits in Salahaddin province, 175km north of Baghdad and not far from the city of Tuz Khurmatu and the Kurdish Peshmerga front line. 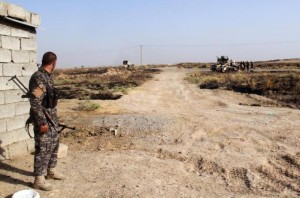 After the Islamic State group took control of nearby villages, the town’s water and electricity were cut, food and fuel supplies dropped dangerously low, and rocket attacks and sniper fire began to break out on a daily basis. Amina, who didn’t give media her real name, escaped from Islamic State fighters by posing as the wife of a neighboring Sunni Muslim villager.

“After walking a short way, our neighbor met us and we drove down a small track. It was the end of June. At the checkpoint there were three armed men, one was Iraqi and two were not. Our friend told them, ‘This is my wife, she wants to give birth’ … They kept asking us questions for ten minutes,” Amina, who is Turk man, recalled from Kirkuk, where she gave birth to her newborn daughter and sought refuge.

Amina said she saw corpses lying beside the checkpoint while she escaped. The man who helped her was later captured, she said. She doesn’t know if he is alive or dead.

Around 2,000 fighters – a mix of ex-Iraqi army and police officers, and other local residents – are defending the town, according to Mustafa Hassan, the leader of Amerli’s local defence force and an Iraqi army colonel. Local defense force members are armed with light weapons, which Hassan said are not enough to counter the Islamic State fighters.

“[The Islamic State group is] gathering fighters from other cities of Hawija, Tikrit, and Mosul. Also, every day they are getting more high quality weapons,” he said. “This is a battle of honour for us, we are defending our land and our families and we will not stop until our last drop of blood.”

The Islamic State group controls the nearby town of Suleiman Beg and all the villages surrounding Amerli. Islamic State fighters are currently one kilometre outside of Amerli, Hassan said, and the battle with local forces is taking place on the town’s outskirts. “They attack us every two or three days with ground troops and they sometimes use tanks and armored vehicles, as well as humvees,” he said. “Mortar attacks occur on daily basis.”

Speaking to media by phone, the town’s only volunteer doctor said two civilians have been killed by sniper fire, and many others were injured as a result of the fighting. Women have died in childbirth because they couldn’t get to a hospital, he said, because the nearest hospitals are in Tuz Khurmatu and Kirkuk, 25 and 100km away from Amerli, respectively.

Children and elderly patients are suffering from illnesses related to drinking unclean water and lacking food, the doctor said.

Meanwhile, United States defense officials reported on Wednesday that the Obama administration is considering launching a relief mission to the besieged town. The nature of the mission and the timetable for reaching a decision has not been made clear.

The Iraqi army has delivered weapons to local fighters in Amerli, Hassan told media. “We receive the weapons by helicopters from Baghdad… The government sends us weapons and ammunition.” These same helicopters also deliver food from the Iraqi Red Crescent, and drugs and medical supplies supplied by the World Health Organization,

Muhammed Essmat Ibrahim, a governing board member of the Iraqi Red Crescent, said that the aid is being transported in by Iraqi army helicopter because “there is no other way [to get the supplies in], just the military helicopters”.

Dr Jaffar Hussain, a WHO representative in Iraq, said the organization gives medical supplies to the Iraqi health ministry, which then transfers them to Amerli. “The issue is there are places like Amerli where there is no access,” Hussain said. “We have been doing this in Amerli for security reasons.”

The food drops, however, are “not enough”, the local doctor said. “We need bread, milk, clean water,” he said. “The world, the international community and the UN need to help us. They just help Kurdistan, Makhmour and Sinjar, and not Amerli.”

Meanwhile, human rights groups and UN representatives have warned that the conditions could deteriorate further. “The situation of the people in Amerli is desperate and demands immediate action to prevent the possible massacre of its citizens,” Nickolay Mladenov, the United Nations special representative for Iraq, said in a statement.

Hasim Ali’s family is still in Amerli. Speaking to media from Kirkuk, and using a pseudonym for fear of reprisal, Ali explained that residents are surviving on bread made after the town’s recent wheat harvest, salt water from wells, and whatever food rations arrive from aid groups.

“Some Sunni families in surrounding villages were helping the people of Amerli; they would tell us when the roads were safe and open. After ten days, [Islamic State fighters] found out about these Sunni families and captured and killed some of them. Now there is no contact between Amerli and these villages,” Ali said.

Three Amerli residents – Qadria, her son Ali, and her neighbor Fatima (not their real names) – escaped Amerli two weeks ago after jumping into an Iraqi army helicopter.

“We waited for hours because we heard that the helicopter would come. First, they unloaded weapons and some food supplies, and after that everyone rushed towards the doors. There was a fight to reach the helicopter, we lost our shoes and abayas [traditional dress] but managed to get on with about 30 others,” Qadri said.

For Amina, fleeing Amerli was bittersweet, as she had to leave behind her four children and husband, who is fighting against the Islamic State group.

Her children don’t have enough to eat, she added, explaining that she has spoken to her seven-year-old daughter every day since she left and has had to make-up stories to rationalist her absence. “I tell her that they are fixing the road so I can’t travel back. I say I will return when the roads are mended.”