ISLAMABAD: At least thirteen people were killed and more than five hundred people were wounded in firing and shelling by police at a point blank range during an anti-government protest led by PTI and PAT in the Constitution Avenue, Tribune International reported.

According to details, dead bodies of  protesting women have been brought to the Poly Clinic, Islama 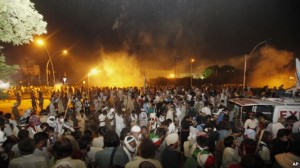 bad. So far, thirteen people have been killed reportedly and 70 are injured, as a result of shelling and firing of rubber bullets by the police.

Rescue sources told that nearly 40 injured have been brought to the PIMS hospital, while 30 to the Poly Clinic.

The administration of Poly Clinic has imposed emergency in the hospital.

Meanwhile, Pakistan Tehreek-i-Insaf (PTI) and Muttahida Qaumi Movement (MQM) have announced for a strike on Sunday, over the use of force on peaceful marchers in Islamabad.