Leaders and clerics say they are ready to join new administration of Haider al-Abadi if certain conditions are met.

Tribal leaders and clerics from Iraq’s Sunni heartland who staged a revolt against outgoing prime minister Nuri al-Maliki’s Shia-led government would be willing to join the new administration if certain conditions are met, a spokesman for the group has said. 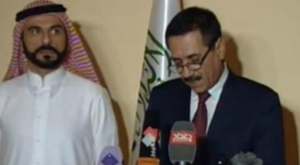 The spokesman, Taha Mohammed Al-Hamdoon, said on Friday Sunni representatives in Anbar and other provinces had drawn up a list of demands to be delivered to Haider al-Abadi, the moderate incoming prime minister.

He called for government and Shia militia forces to suspend hostilities to allow space for talks.

“It is not possible for any negotiations to be held under barrel bombs and indiscriminate bombing,” said Hamdoon in a telephone interview with the Reuters news agency.

“Let the bombing stop and withdraw and curtail the [Shia] militias until there is a solution for the wise men in these areas.”

Abadi faces the daunting task of pacifying Anbar province, where Sunni frustrations with Maliki’s sectarian policies have pushed some to join an insurgency led by Islamic State militants, Reuters reported.

reporter, reporting from Iraq’s second city of Erbil, said the Sunnis have been demanding a “whole range of things”.

She said the demands include releasing Sunnis from prisons where they have been held, many of them without charge.

The Sunnis also want jobs created in their areas – “basically making them feel as if they are part of the country again”, said our correspondent.

“But importantly there has been a message of support from Ayatollah Ali al-Sistani, the chief religious Shia cleric, saying that this could be the opportunity for essentially a new page,” she added.

Underscoring the urgency of containing a sectarian conflict fuelled by fighters from the Islamic State group, Sistani, who delivered his message in a weekly sermon through a spokesman, urged the military to hoist only Iraq’s flag to avoid factionalism.

Meanwhile, Abadi on Friday urged his countrymen to unite in the face of dangerous challenges and cautioned that the road ahead would be tough.

On his Facebook page, Abadi said he would not make unrealistic promises but he encouraged Iraqis to work together to strengthen the country, which is being wracked by sectarian violence.

Maliki on Thursday stepped down as the country’s prime minister, bowing to huge domestic and international pressure. He voiced support for Abadi, a fellow member of the Shia Dawa party.

After a US occupation lasting nearly a decade, which ended in 2011 with a price tag of more than $2 trillion, Iraq is nowhere near the stability promised when Saddam Hussein was toppled in 2003.

Maliki was widely resented as a divisive and authoritarian figure who drew comparisons with the former Iraqi dictator.

Winning over Sunnis, who dominated under Saddam and were sidelined by Maliki, will be vital to any efforts to contain a sectarian civil war marked by almost daily kidnappings, execution-style killings and bombings.