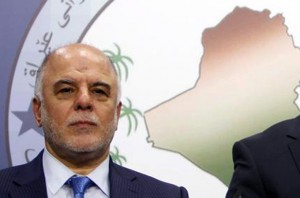 Fouad Massoum tasked Abadi, first deputy speaker of parliament, with the role during a brief ceremony broadcast live on television on Monday.

“The country is now in your hands,” Massoum told Abadi, who moments earlier was selected as nominee for prime minister instead of incumbent Nouri al-Maliki by the Shia National Alliance parliamentary bloc.

The deepening political tensions come as fighters from the Islamic State group made advances by capturing the town of Jalawla northeast of Baghdad, after defeating Kurdish Peshmerga troops.

This latest round of political infighting could hamper efforts to stem advances by the Sunni group.

The Shia National Alliance had won the most parliament seats in the April elections and Maliki had seen himself as keeping the post for a third term.

But has been accused by critics of steering the country toward a sectarian war.

In a televised speech late on Sunday, Maliki had declared that he would file a legal complaint against Masum, for committing a “clear consitution violation” by missing a deadline to ask the biggest bloc in parliament to nominate a prime minister.

On Monday, the French Foreign Minister Laurent Fabius called on the EU to “mobilize” to respond to appeals from Iraqi Kurds for arms to fight Islamic State members, as the US continues its air campaign against the fighters.

Senior US officials told AP news agency on Monday that the Obama administration, which launched airdrops and airstrikes last week to support Kurdish and Iraqi forces battling the armed group, has begun directly providing weapons to the Kurdish peshmerga forces.

No official comment has yet been made about the weapons supply.

While the airdrops appear to have provided urgently needed aid, the harsh conditions of the Sinjar mountain range in mid-summer have taken scores of lives among Iraq’s Yazidi minority, who are threatened by the armed group.

More than 30,000 Yazidis, mainly from Sinjar, have already crossed into an area of northern Iraq controlled by Kurdish forces after a week-long journey that took them through Syria after they left the mountain, according to Yazidis and UN officials.