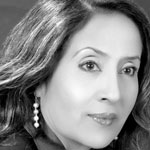 Paris was like a femme fatale. Ambassador Jamshed Marker loved being in the company of artists, writers, fashion designers and intellectuals. He counts conductor Zubin Mehta and actor Omar Sharif among his good friends. But one sad incident clearly stays in his memory of those bucolic days; the untimely death of Shahnawaz Bhutto. Marker sketches the details of the tragedy as though it happened yesterday.

Begum Nusrat Bhutto lived in Cannes, in the French Riviera. The lodgings were loaned to her by the then French minister of Justice. The minister was a good friend of the Bhuttos as was President Gaddafi of Libya . Gaddafi had given large sums of money to the Bhuttos. One evening during dinner in a restaurant, the two boys — Murtaza and Shahnawaz — entered into an argument over the division of the money.
“Benazir tried to calm them down but she didn’t succeed,” remembers Marker. In the end she took her mother and sister back to their home, while Murtaza followed Shahnawaz to his flat. The fight turned ugly. At some point the French police came to arrest the inmates. By that time Shahnawaz was unconscious. He had taken an overdose of drugs. The police could not arrest Murtaza because he had a Syrian diplomatic passport. Later that night the younger brother passed away. The police arrested his Afghan wife for “not coming to the aid of a dying man.” She hired a lawyer but the case was quashed by the bereaved family when she threatened to spill the beans.

“The whole affair was so sordid; so grim; so grisly,” says Marker who was given all the details by the head of the French intelligence police. But General Naseerullah Babar, who was later Benazir’s interior minister, claims that General Zia had a hand in the murder. He had sent a death squad to eliminate the younger son. Babar says Shahnawaz was poisoned, I ask Marker: “No, that’s not true at all. Zia had nothing to do with it.”

Ambassador Marker, 88, sits in his airy study at his Bath Island home, surrounded by photos of world leaders he has met. It’s like an interview with history as he unfolds chapter after chapter of world events in which he was a player dexterously mapping Pakistan ’s course among the comity of nations. Did a supernatural power guide him? I ask. He smiles. “As a fighter in the navy, I encountered danger and death. It made me strong. Life is all about determination, diligence and truth.”

He is busy writing another book where he will name names. Unlike Quiet Diplomacy, which is a brilliant memoir of the ambassador, the next one tentatively called Outlook, will focus on the social, developmental and political corrosion in Pakistan over the years. “Sycophancy is the single factor in our failure to progress,” he says. He remembers how one day he and his wife went to have lunch with Prime Minister Liaquat Ali Khan and Begum Raana. The host was missing. After a while he came in seething with rage. “Normally Liaquat didn’t lose his cool. But that day he fumed,” says Marker. “How dare these evacuee fellows present me with a number of properties saying that I can have them in lieu of my properties I have left behind in India ?” the prime minister told Marker. “I threw back the folder at them saying that they should never raise this subject again until they had provided shelter to each and every refugee living out in the open air all over Karachi .”
Marker says Liaquat Ali Khan was an honest man. “When he died he did not own a single house and had just Rs.4,000 in his bank account. Look at our leaders today… they are corrupt and surrounded by sycophants whose only job is flattery. It’s been the death of our value system. Few have the guts to speak the truth before the rulers.”

How come Marker is meant to be in the Guinness Book of Records as having been Ambassador to more countries than any other person if he was not a sycophant? “Well, I’m not sure if I’m in the Guinness Book, but all I can say is that I never jockeyed for a job. I really didn’t care and in fact each time the government changed I resigned.”
Though he was a non-career diplomat, Marker holds the record of serving as ambassador of Pakistan continually for thirty years, in ten top capitals of the world. In each country, he left a mark. Embarrassed to talk about his own feats, Marker meanders through vignettes that add a touch of humour to them. “In Prime Minister Suhrawardy’s time the joke of the day was that the society ladies were divided into two categories: PPM (pinched by the prime minister and UNPPM (un-pinched by the prime minister)! But he was another very honest man. His only weakness was women.

“Zulfi would say that the only way Suhrawardy can be arrested is for molesting women!” Marker was a good friend of Zulfiqar Ali Bhutto who like Marker shared a love of cricket. “But when he became the PM, I stopped calling him Zulfi.” Marker remained a friend even when ZAB was out in the cold during the Ayub era. “I sent him a letter in the diplomatic bag. I’ve never told anyone but I even gave two lakh rupees to him when he formed the PPP. I could have lost my job, but I didn’t care!”

The rot according to Marker began with Ghulam Mohammad. The bureaucrats became very powerful and in collusion with Punjabi politicians like Gurmani and others ruined the system of governance. “People are like sheep led by wolves,” Marker quotes a friend. “ Pakistan after Liaquat has never been ruled by a genuinely elected leader.” says Marker. “Those who ruled were never true representatives of the people.”

He wanted to resign when Benazir Bhutto became the PM the second time. “She came to Washington on a state visit. In our private meetings where we discussed Pakistan ’s national interests, she always had her lobbyist Mark Segal and friend Peter Galbraith sit in. I was most unhappy about it. They had no business to be there.”

There are many more anecdotes that Marker shared with me. Hopefully they will find a place in his new book. History is about people in power and how they ruled. Who better to write about Pakistan than this great man who served “two presidents, seven prime ministers, three chiefs of army staff and many foreign ministers.”
Marker quotes Moeen Qureshi who was with Zia on the night Bhutto was hanged. “I stayed with Zia until 2am in the morning. Zia was cool as a cat as we talked about everything under the sun. The next morning I read that ZAB had been hanged!”

– Anjum Niaz is a freelance writer.