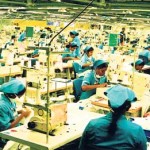 Half of Sri Lanka’s post-independence was ravaged with countering terrorism. Sri Lanka’s sovereignty and territorial integrity was secured by its armed forces but not without sacrificing life and limb. The armed forces passed on the next phase of post-conflict to Sri Lanka’s political leadership. Nevertheless, it is more than clear that from the manner economic development is defined and approached we are watching India economically take over Sri Lanka on a silver platter. Would it not be a shame and an insult to Sri Lanka’s security forces to negate all that they fought to win when in time all that Sri Lanka took pride in ends up owned and belonging to India?

It is not that Sri Lanka’s leadership has not been warned. Countless times many have raised the importance of securing Sri Lanka natural resources and strategically important focal points. Enough of times warnings have been given to look beyond the gifts given. Strategic and natural resources should gain no place in diplomatic or trade discussions where it would mean that they end up a security risk to Sri Lanka.

In reference to India, whatever ancient ties is being used to promote cordial relations – we should not be gullible to realities. India helped train, support and finance Tamil militant movements, India used every diplomatic opportunity to humiliate Sri Lanka and what more excuses can India give for its ultimate betrayal in Geneva. Our relationships with India must always have at the back of our mind what India is still capable of doing to Sri Lanka because India took the option of undercutting Sri Lanka instead of developing better ties with Sri Lanka. Sri Lanka cannot be naïve to this fact especially when India ignores the fact that Sri Lanka did India a favor by eliminating the LTTE and reducing the Eelam homeland calls which is eventually targeted at breaking up India’s south. Yet, India has allowed Tamil Nadu leaders to go and deliver its TESO Resolutions to the UN.

It is apparent that India thinks itself too big and too powerful to be thanking Sri Lanka so its next best alternative in case Tamil Nadu separatism does go beyond India’s control is to ensure that Sri Lanka is very much under its periphery of control – to ensure that India needs to interlock Sri Lanka to various trade and service agreements which Sri Lanka appears to be blindly agreeing to – blindly because it is under the foreign radar to show FDIs and development to the rest of the world and India has managed to ensure other nations are kept aloof while it can tie Sri Lanka’s noose.

This has got and is getting Sri Lanka nowhere. Can Sri Lanka allow economic development to compromise national security?

While we have no issues with Indian people, but the influx of Indian labor (legally and illegally) controlling private enterprises, functioning as CEOs, holding key portfolios and functioning as “advisors” is something that needs to be addressed NOW because Sri Lanka’s army can only protect the nation but Sri Lanka’s political leaders appear to have no answers for the calamity that is likely to result by blindly allowing the Indian influx on the excuse of cultural, diplomatic and economic ties – the problem is nothing that the armed forces can solve ever.

What is the logic of economic trade with a country as large as India? Against how many Indian projects opened in Sri Lanka has Sri Lanka opened in India? Will that gain even trickle down to offer any benefit to the Sri Lankan masses – are these all not private profit generating deals? The people are not fools – they are well aware of how much Sri Lanka is giving India, a country that morally has no right to be promoting itself as Sri Lanka’s friend.

India has been given stakes in oil distribution, oil exploration, telecommunication, banks, tourism, hotels, vehicle and machinery, utilities, renewable energy, plantations, fertilizers, agro-processing, food processing, pharmaceuticals, education and knowledge, IT, bio-tech and despite the many warnings real estate culminating in a $460m Tower in the heart of Colombo spelling further dangers to Sri Lanka’s security – national security must not solely be handled by Sri Lanka’s external affairs ministry! All that we ask is to ensure Sri Lanka’s economy is not controlled by India – now or ever.

As far as the Tamil only Homeland is concerned we continue to say it is nowhere else but in Tamil Nadu and all other issues Sri Lanka is currently facing is rooted in ego-issues and pride factors gathering moss over the decades. This too can if articulated properly be solved if Sri Lanka’s political leaderships point to Tamil Nadu and tell India its their call now because if autonomy for Tamils is now what Sambanthan and et al want – there is a readymade State in Tamil Nadu there is no need to create one, its federal, its majority is Tamil, its official language is Tamil and probably India may agree to sing the Indian National anthem in Tamil as well – there is no need to carve out a separate state at all!

In a worse case scenario what Sri Lanka will need is FOOD – therefore our agriculture and fisheries – what has been gifted to its natives by nature must never fall into the hands of foreign investors. If what we have is sufficient our own people should be encouraged on how to develop to sustain ourselves first – we do not need to compromise our bellies for cash crops. The present world conflicts revolve around the hunger to secure minerals and natural resources – when we know this, why do we want to hand over our key stakes to foreign investors? When the future lies with Asia – does this not mean that we are returning to a period when civilization began and East held supremacy and should this not mean that Sri Lanka must remain sovereign when it was once known as the Granary of the East?

There are matters that Sri Lanka needs to immediately address that go beyond trade and mutual political goodwill. Trade statistics between India and Sri Lanka clearly points lack of any significant benefit to Sri Lanka while from just 10 companies during LTTE reign India has over 100 Indian companies firmly rooted in Sri Lanka enjoying BOI investment incentives, tax holidays and taking profits back to India far more than what was initially invested whilst scores of other companies are being run by local Indian proxies.

Do we need to repeat regarding the sub-standard pharmaceutical drugs flooding to Sri Lanka? Has giving oil distribution to India not resulted in India repatriating ¾ times the capital it invested? Is India not killing our Ceylon tea now that it has secured practically all our tea plantations and are mixing our teas with India low quality tea and selling them as Pure Ceylon tea, will this subquality sold cheap not end up Sri Lanka losing the proud place it held and why is Sri Lanka watching this rape of our Ceylon tea take place – where is the benefit to Sri Lanka apart from the initial investment?

Those who promote that Sri Lankans will have opportunities for employment in India may first like to answer how Sri Lankans can gain employment when over 320m non-graduate Indians and close to 5m Indian graduates are unemployed? Does Sri Lanka’s leaders want Sri Lanka to face the situation that happened to Bangladesh, Nepal and Bhutan because of India? Over half a million Indians live in Bangladesh illegally, they do not pay taxes and send millions of dollars through illegal smuggling channels to India, whilst in Nepal there are over 5m Indians living legally and illegally and India demanded an unauthorized trade agreement with India which resulted in a blockade of essential goods and ecological havoc as India denied gasoline and kerosene supplies via India. These are just a few examples of methods used by India to show its might. So if other SAARC nations are cautious of signing bilateral trade agreements with India related to service sectors why are our advisors not giving proper advice? Should these dynamics and dangers not mean that Sri Lanka needs to be far more cautious on what it signs with every foreign investor especially India a population of over 1.2BILLION against just 20m in Sri Lanka?

A steady flow of Indian ministers, Indian trade delegations and Indian diplomatic sweet talks translate to mean India is pushing its agenda in Sri Lanka at full force – it has steadily used the excuse of November’s UPR to coerce Sri Lanka into giving India key stakes everywhere wherein India will slowly plan to usurp power from Sri Lankan hands. This in time would mean a total economic invasion and capture and probably lead to handing over Sri Lanka legally and officially without a gunshot and power hungry Sri Lankan politicos will find they will not have a country to lead – they would end up as traitors in Sri Lanka’s history books looked down upon by the masses for giving S+ri Lanka to India compromising what the armed forces fought to achieve.

We hope that Sri Lanka’s leaders finally open their eye and reverse the damage done and devise ways not to fall prey to similar diplomatic and economic invasions by India and any other foreign nation. (By Shenali Waduge)