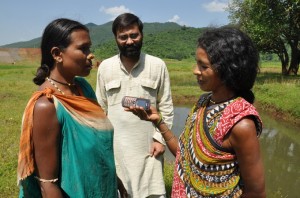 Indian journalist and founder of CGnet Swara, a mobile news service, has won the 2014 Freedom of Expression Award, beating the US whistleblower Edward Snowden.

The award, organised by the UK-based Index on Censorship, was conferred on Shubhranshu Choudhary for the service that allows tribals in remote parts of India to receive and share news in the local language.

More than 100 citizen journalists trained by Choudhary produce audio news reports that are hosted on a website, giving them a global reach.

Index on Censorship – an international organisation that promotes freedom of expression and challenging censorship – gave the awards on Thursday at the Barbican Centre, London.

“We recognise the bravest journalists, artists, campaigners and digital innovators from around the world. Their true stories remind us that the right to free expression must be defended at all costs,” a statement by Index on Censorship said.

“This year’s strong shortlists feature 17 remarkable nominees, selected from over 400 public nominations each have courageously and creatively stood up against some of the world’s most repressive regimes,” it reads.

Choudhary was selected in a public vote for the ‘Digital Freedom’ award contended by former US National Security Agency (NSA) contractor Edward Snowden; TAILS (The Incognoto Amnesiac Live Operating System), an open-source encryption tool that can help protect the free online communication of journalists and sources in any country; and China’s Free Weibo – an uncensored version of China’s biggest social network, SinaWeibo.

CGNet Swara, a mobile-based news service developed with the help of Microsoft Research India, helps the Tribals of central India’s Chhattisgarh state to tell their version of stories, in their language (Gondi), which Choudhary said is often ignored by the mainstream media.

“Tribals in Chhattisgarh speak Gondi, which is not understood by the majority of journalists and politicians. When people try to report the Tribals’ affairs or Maoist rebellion they end up talking to people who speak little bit of Hindi or English. It’s tribals’ story being told by others,” Choudhary told Al Jazeera.

“But mobiles are bridging that gap and helping Tribals come closer to the mainstream India,” he said.

In his category, Choudhary has secured more public votes than NSA whistleblower Edward Snowden and others.

Choudhary’s CGNet Swara is rooted in sensitive tribal areas in Chhattisgarh from where Maoists insurgents have been fighting the Indian state in a civil war for more than 40 years.

Maoists say they are fighting for the rights of indigenous tribes and rural poor who deserve a greater control over their resources. India’s prime minister has declared them the country’s biggest internal security threat.

Caught in the middle are the tribals or Adivasis – believed to be India’s earliest inhabitants – who have borne the brunt of the conflict.

They sit on some of the planet’s richest sources of coal and iron ore while corporatisation and extraction of minerals have caused massive displacements and widespread anger against the government.

Pakistan’s Shahzad Ahmad, who is fighting against online censorship in Pakistan through his organisation ‘Bytes for All – Pakistan’, has been awarded in the Advocacy category while Egyptian rapper Mayam Mahmoud, who uses hip-hop to address women’s issues in the country, has won the award in Arts category.

The journalism award has been honored to Azerbaijan’s Azadliq,which has continued to report on government corruption despite increasing pressures by the authorities.

“In Pakistan, we were buried too much into our work that we didn’t realise that it is getting recognition from international community. I am humbled and unable to express my feelings to be in a company of such amazing change-makers from around the world,” Shahzad Ahmad told Al Jazeera from London.

He said, “[Pakistan ] government is hellbent on controling the internet as it is becoming more and more popular medium for communication and expression for the Pakistanis especially youth”.

“Many websites including some of the popular sites like Youtube are banned for more than a year, political expression is also curtailed on the internet.”

“We create awareness among masses through campaigns like ‘Access is My Right’ to understand how their rights are being taken away by blocking and filtering the content on internet in the name of excuses like ‘Decency’, ‘National Security’ and ‘Religious Morality’,” he said.

Ahmad said that his group is also trying to work through the judiciary to upheld the constitutional clauses which guarantees freedom of expression in Pakistan.