SRINAGAR: An Indian army soldier shot dead five colleagues before killing himself on Thursday 27 Feb 2014 Tribune International (Australia ) reported, an army official said, in what investigators said appeared to be a case of stress-related violence in a force dogged by a staffing crunch.

The armed forces, the world’s third largest, struggle to fill thousands of vacancies mainly due to difficult conditions and the high risks 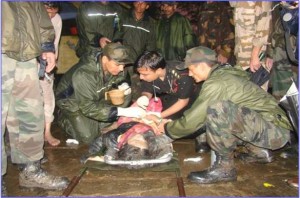 involved, according to the Defence Ministry.

“One of the army men ran amok and fired indiscriminately at his colleagues inside an army camp at Safa Pora,” army spokesman Lieutenant Colonel N N Joshi said of the incident in the early hours in Jammu and Kashmir.

“Five army men died on the spot and one was injured. The army man later shot himself dead using his service rifle.”

Joshi said the army has ordered an inquiry. A senior army officer who declined to be identified said initial investigations suggested the shooter was under stress.

The shooting comes a day after India’s navy chief quit after taking responsibility for a string of operational incidents, the latest of which saw smoke sweep a submarine with two officers still missing. A dockside blast in Mumbai killed all 18 aboard another submarine in August.

There were 635 cases of suicide or attempted suicide in the armed forces from 2003 to 2007, all “attributable to increased stress environment leading to psychological imbalance in the soldiers”, a parliamentary committee said in a 2010 report.