Supreme Court rejects petition but stresses such courts are not legal and their decree can not be enforced. 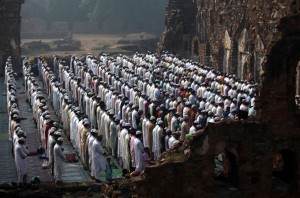 India’s Supreme Court has rejected a nine-year-old petition seeking ban on Islamic Sharia courts in the country but maintained that such courts were not legal and their decree could not be enforced.

The top court said that Islamic judges, who interpret religious law, could only rule when individuals submitted voluntarily to them and their opinions or fatwas were not legally binding, the AFP news agency reported.

“Sharia courts are not sanctioned by law and there is no legality of fatwas in this country,” CK Prasad said on Monday as he read out the judgment from a two-judge bench.

“No religion is allowed to curb anyone’s fundamental rights,” the court said in its ruling.

Vishwa Lochan Madan, a New-Delhi based Supreme Court lawyer, who had filed the petition in 2005, told News agencies that his demand to disband Sharia courts has been scrapped.

“The apex court has not banned the Sharia courts. But now it’s clear that Sharia courts are not legal either. Earlier there was no clarity on it,” he said.

Madan said that by not banning the Islamic courts the “beautiful judgment” means a “win-win” situation for both sides.

Fatwas issued by Muslim religious leaders are advisory only and not obligatory.

The All India Muslim Personal Law Board, which primarily defends Sharia laws, maintains that a religious fatwa is “merely an opinion” and the same cannot be enforced on any person coercively.

The counsel of the Darul Uloom Deoband (Islamic Seminary), Syed Shakeel Ahmad, said that the top court has not declared Islamic laws as unconstitutional.

“The court has streamlined the procedure. They have not said that Sharia courts are unconstitutional or they cannot run,” the Reuters news agency quoted him as saying.