DHAKA: India extended their domination over Pakistan in World Cup events with a seven-wicket demolition of the arch-rivals in the Super-10 round of the World Twenty20 in Dhaka on Friday. 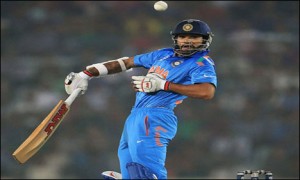 Leg-spinner Amit Mishra grabbed two wickets for 22 runs in four overs as India kept Pakistan down to 130-7 after electing to field in the Group Two match at the Sher-e-Bangla stadium.

Shikhar Dhawan and Rohit Sharma then gave India a flying start with a 54-run opening stand in eight overs as Mahendra Singh Dhoni’s men surpassed the modest total with nine deliveries to spare.

India slipped to 65-3 before Virat Kohli (36 not out) and Suresh Raina (35 not out) steered their team to victory with an unfinished partnership of 66 for the fourth wicket.

Pakistan, who have never beaten India in the 50-over World Cup or the World Twenty20, found runs hard to come by against the steady Indian attack led by Mishra and Ravindra Jadeja (one for 18).

Umar Akmal top-scored for Pakistan with 33 off 30 balls, but found little support at the other end as wickets fell at regular intervals on the slow pitch.

Sohaib Maqsood delighted a sell-out crowd of 25,000 by smashing 15 runs in the final over bowled by Mohammed Shami, before being run out off the last ball for a 11-ball 21.

Pakistan, who lost opener Kamran Akmal in the second over, moved to 44-1 by the eighth over when India hit back with two wickets in the space of three runs.

India restricted Pakistan to 50-3 at the half-way stage of the innings, before 13 runs in the 11th over bowled by left-arm spinner Yuvraj Singh appeared to lift the pressure.

Umar Akmal and Shoaib Malik (18) produced the best partnership in the innings, adding 50 for the fourth wicket, but none of the other batsmen settled in to rescue the faltering innings.

When India batted, Dhawan hit 30 off 28 balls before his dismissal, caught at fine-leg hooking Umar Gul, triggered a collapse in which two more wickets fell for the addition of 11 runs.

Sharma (24) played on to Saeed Ajmal, while Yuvraj was bowled by Bilawal Bhatti for one. But Kohli and Raina tamed the Pakistan bowlers with fluent strokes to see India through.

Defending champions West Indies, Australia and Bangladesh are the other three teams in the group, with the top two advancing to the semi-finals.