Beijing: China has sharply reacted to India’s plans to construct a road network along the McMahon line in Arunachal Pradesh and expressed hope that India will not take any action which may complicate the situation before a final settlement is reached to end the boundary dispute. 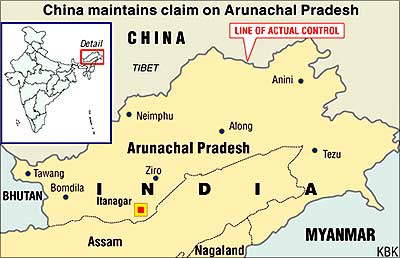 “We still need to verify the specifics. The boundary issue between China and India is left by colonial past. We need to deal with this issue properly,” Foreign Ministry Spokesman Hong Lie told a media briefing here.He was reacting to comments by Union Minister of State for Home Affairs Kiren Rijiju stating that plans are afoot to construct a road network along the international boundary from Mago-Thingbu in Tawang to Vijaynagar in Changlang district of Arunachal Pradesh to match the China’s infrastructure development.

“There is a dispute about the eastern part of the China- India border. Before final settlement is reached we hope that India will not take any action that may further complicate the situation,” Hong said.
“We should jointly safeguard the peace and tranquility of the border area and create favourable conditions for the final settlement of the border issue,” he said.India’s concerns arise out of extensive road, rail air network developed by China in Tibet which could play pivotal in moving the troops and equipment at a greater speed in the rugged Himalayan region.

Besides extensive highways, China’s rail network came close to Sikkim border and Beijing has announced plans to build a new rail network up to Nyingchi which is close to the border of Arunachal Pradesh.China has built about five airports in the Tibet region.Beijing asserts that the infrastructure development is part of efforts to develop remote parts of Tibet.

The two countries have held 17 rounds of Special Representative talks so far to resolve the boundary dispute.The issue also figured during last month’s talks between Prime Minister NarendraModi and Chinese President Xi Jinping during his visit to India.The two leaders agreed to make efforts to resolve the border dispute at the earliest.