Modern slavery is a brutal reality. Nearly 46 million people around the world are living as slaves, forced to work in factories, mines and farms, sold for sex, trapped in debt bondage or born into servitude, according to 2016 Global Slavery Index.

The survey by Walk Free Foundation, the Australia-based human rights group, estimates that 45.8 million people are in some form of slavery in 167 countries. 58 percent of people in slavery are living in just five countries: India, China, Pakistan, Bangladesh and Uzbekistan. The report estimates that North Korea has the world’s highest prevalence of slavery at 4.4 percent of its population, followed by Uzbekistan (4.0 percent) and Cambodia (1.6 percent).

The index defines modern slavery as a situation where “a person cannot refuse or leave because of threats, violence, coercion, abuse of power or deception, with treatment akin to a farm animal.” This also includes victims of human trafficking, forced labour, debt bondage, forced or servile marriage, and the sale and exploitation of children.

About 1.4% of Indians currently live as modern slaves.

“Vulnerability to slavery in India has some common elements, with poverty and the lack of capacity to absorb shocks, and deep structural inequalities reflecting gender, caste and tribe all being highly relevant,” the report said. This has forced many poor Indians to work as bonded labourers and prostitutes. Often, they are even pushed into begging.

The survey underlined that domestic helps in India are a particularly vulnerable group, as “work takes place in private homes and largely out of the reach of regulation.”

The Report compiled information from 167 countries with 42,000 interviews in 53 languages to determine the prevalence of the issue and government responses.

As a percentage of the population, Uzbekistan (3.97 percent) and Cambodia (1.65 percent) trailed North Korea, which the study said was the only nation in the world that has not explicitly criminalised any form of modern slavery.

Some 124 countries have criminalised human trafficking in line with the UN Trafficking Protocol and 96 have developed national action plans to coordinate the government response.

“We call on governments of the top 10 economies of the world to enact laws, at least as strong as the UK Modern Slavery Act 2015, with a budget and capability to ensure organisations are held to account for modern slavery in their supply chains, and to empower independent oversight,” he said.

“I believe in the critical role of leaders in government, business and civil society. Through our responsible use of power, strength of conviction, determination and collective will, we all can lead the world to end slavery.”

The victims of modern slavery are usually subject to exploitation, a situation they cannot leave due to threats, violence, coercion, abuse of power or deception. 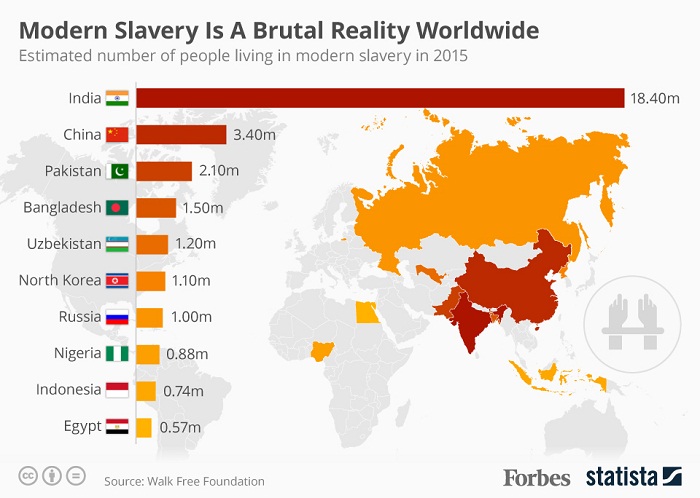