Opposition PTI says it will withdraw its MPs, a day after leader Imran Khan called for civil disobedience campaign.

The party of Pakistan’s opposition leader Imran Khan has quit the national assembly and vowed to intensity anti-government protests, a day after he called for a campaign of civil disobedience in protest at the government of Nawaz Sharif. 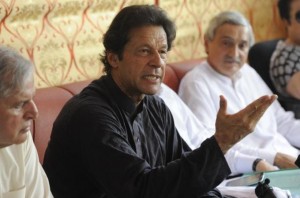 The party is Pakistan’s third largest. Qureshi said it was still making a decision about what to do in northwestern Khyber-Pakhtunkhwa province, where they are in power.

Khan has rallied with thousands of supporters in Islamabad in recent days, demanding the government step down and hold fresh elections and alleging fraud in last year’s general election.

But the protest failed to attract the vast crowds Khan had promised and other opposition parties on Monday distanced themselves from his call for a campaign of civil disobedience, leaving him looking isolated.