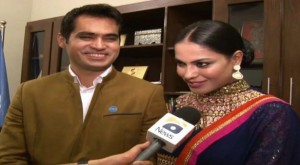 Veena Malik was appointed during a ceremony held here on Friday and joins he husband who was appointed as a Goodwill Ambassador earlier.

After the ceremony Venna Malik spoke with media about adjusting to married life saying that her husband gets her a diamond ring every time the couple fights.

Her husband Asad Bashir Khan said Veena had several film offers and would act if a good role came along. Asad revealed that Veena would also cook for him.